Home | Green | Cost of Solar Power to Drop 75% by 2020? US Military Embraces It
Commentary

Not one to shy away from overstatement, Ambrose Evans-Pritchard is not a writer we would normally quote extensively; well-renowned as the Telegraph newspaper is, for which he frequently writes in the Business section, but his article last week on solar power trumping shale gas even had us sitting up and taking notice.

True, many of the figures quoted in his article come from firms involved in the solar industry and as such we can expect them to put a positive gloss on the numbers, but we wouldn’t count the US Energy Department to be biased and they are quoted as saying they expect the cost of solar power to fall by 75% between 2010 and 2020.

By then, average costs will have dropped to $1 per watt for big solar farms, $1.25 for offices and $1.50 for homes, achieving what the Telegraph terms the Holy Grail of grid parity with new coal and gas plants without further need for subsidies. That’s the crunch, isn’t it – the subsidies. But if we think subsidies in the US or UK have been high, consider Germany, early starter in the solar power race.

Households have been bled dry to subsidize solar power – around €100 billion or more has been frittered away on costly feed-in tariffs. In addition, German investors have lost their shirts on a string of solar ventures that have gone bankrupt, only to see the gains leaked out to copycat companies in China which are able to undercut German rivals in their own market with cheap labor and giveaway credit.

Still, that artificially created market has spurred investment around the world; even the US defense establishment is heavily involved, with Evans-Pritchard quoting a string of projects, each of which will help bring down costs and improve efficiencies. Costs have already come down by a quarter over the past year due to the flood of cheap Chinese panels, but the 75% fall expected to create the tipping point where utilities invest in solar over coal or natural gas will come about by the adoption of new technologies to boost the conversion efficiency and the creation of low-cost materials in place of silicon-based photo-voltaics. 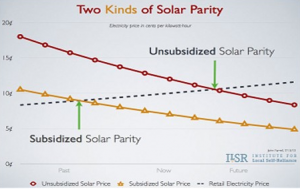 Courtesy of the Telegraph.co.uk

As costs fall, uptake will rise, creating its own cost-of-scale reductions, initially in emerging markets where frequently the only other choice is diesel-powered generating capacity or mature markets like Italy where the cost of electricity is high due to inefficiencies in the generating market. But gradually in markets like the US, the imposition of carbon penalties on conventional power generation will favor solar as the capital cost falls and efficiency of collection, storage and distribution increases. 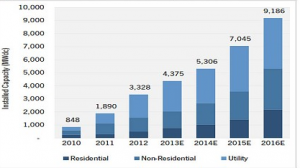 Courtesy of the Telegraph.co.uk

As with the contribution the US military made to semiconductor research in the 1980s, the involvement in solar will add a depth of funding and talent unparalleled anywhere else in the world.

It won’t all end up on the battlefield – the military is already a major investor in solar arrays with 14 MW in the Mojave Desert powering a third of the US Naval Weapons Station with Pearl Harbor said to be next to follow. Military economics are not commercial economics, of course; the desire for independence from the grid could justify a power cost higher than utilities would accept, but where the military leads, the commercial sector could follow if, as expected, costs continue to fall.

So much from tight oil and gas, everyone gets sunshine.