The Russian producer Rusal recently reported a first half 2013 loss of $439 million, versus a breakeven position last year, nominally a $1 million profit. Revenue for the six months to June 30 fell 8.8% year-on-year to $5.2 billion on volume of a whisker under 2 million tons, down 4.5% from a year ago; revenue falling faster than production due to the lower prices.

The company has made efforts to reduce production, but while Rusal is the world’s largest producer of primary aluminum, it cannot on its own cure the global glut.

As firms like Rusal and Alcoa try to address over capacity by closing plants, new production is opening up elsewhere.

Abu Dhabi’s EMAL Phase II smelter is due to complete in December, according to Aluminium International Today, adding 500,000 tons to global supply at price levels that can’t make a profit even at current aluminum levels – 500,000 tons is equivalent to all of Alcoa and Rusal’s combined recent closures.

Earlier this year, Sumitomo predicted that slowing demand growth and rising supply is expected to see the surplus rise from 883,000 tons this year to 994,000 tons in 2014. HSBC agrees, seeing the surplus persist through 2016, as this graph from data released in their Third Quarter Review illustrates: 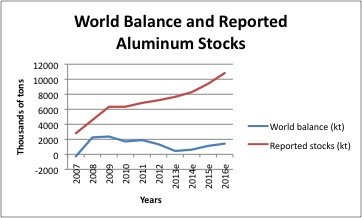 As a result, aluminum stocks and the stocks/consumption ratio as measured in numbers of weeks of supply are expected to continue to rise through 2016 from the current 8.1 weeks to 9.7 weeks, the bank estimates.

The curse and the cure could be the early end of taper relief and, perversely, a rise in interest rates. If rates rise significantly enough to choke off the stock-and-finance trade, metal availability will increase, reducing physical delivery premiums.

Currently around 25% of primary mills are believed to be losing money; if prices collapse further, that could rise as high as 50%, in which case mass closures or idling of capacity will result and ultimately so will a recovery in prices.

Which producers will emerge still in business, of course, is another question. Either way, primary aluminum production is not an enviable business to be in at the moment.

Need aluminum price outlooks and forecasts for 2014? Check out the agenda for our upcoming event: