Home | Non-ferrous Metals | Is Chalco Coming to an Aluminum Smelter Near You?
Commentary

Is Chalco Coming to an Aluminum Smelter Near You?

A recent Reuters article reported on a disturbing move by Beijing aimed at curbing the relentless rise in aluminum smelter capacity in China – move production, such as that of Aluminum Corp of China Ltd (Chalco), overseas!

The news service reported that the Ministry of Industry and Information Technology (MIIT) and National Development and Reform Commission (NDRC) had been in discussions with aluminium smelters about shifting some of their production overseas rather than continue the unprecedented expansion in the northwest region of Xinjiang.

Smelter groups have been encouraged to expand rapidly in the region where abundant coal makes the cost of power cheaper than eastern regions, particularly Henan province, currently home to the largest concentration of Chinese smelter capacity. Official data quoted by Reuters showed that about 22 million tons of aluminium smelting capacity operated in July, out of more than 27 million tons of capacity in the country – the excess being larger than the total capacity of the world’s largest producer, UC Rusal.

Would an aluminum forecast make things easier for your company? Learn more about MetalMiner’s forecasting capability!

China now accounts for half the world’s production capacity, yet to date much of that material has remained within the country behind export tariffs making exports unattractive.

The resulting premium that domestic consumers pay for primary metal has similarly limited exports of semi-finished goods to some extent, although exports of rolled and extruded products have been rising over recent years, as this graph from HSBC shows: 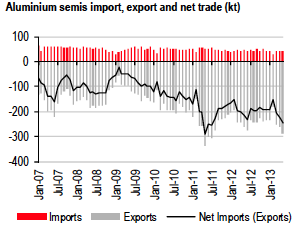 Beijing’s move, described as clutching at straws by unnamed market participants, would greatly exacerbate the larger oversupply problem in the global market – particularly if Beijing decided to provide subsidies of some sort to Chinese smelters to set up overseas, if Chalco’s experience is anything to go by.

This week, top Chinese producer Aluminum Corp of China Ltd (Chalco) said it had suspended its first overseas smelter project, in Malaysia, due to global oversupply and low prices. Other groups would require some kind of handout from Beijing to encourage them to make investments outside the country rather than inside, but a desperate Beijing may just be prepared to do that, either overtly as government policy or more likely covertly in deals with producers agreeing to limit any further domestic investment.

Even without the threat of smelter start-ups outside of China, the prospects for the aluminum market look pretty bleak, with continuing overcapacity and rising stocks threatened by an earlier-than-expected end to cheap financing and possible rule changes to aluminum warehousing impacting the stock-and-finance black hole that has been swallowing excess production for years.

When that trend reverses, up to 10 million tons of metal could be looking for a new home – and then we really will know the meaning of excess aluminum supply.

*Get Stuart’s outlook on the 2014 aluminum market at our upcoming commodity conference: