Contrary to some other reports (such as HSBC’s Quarterly Metal Review), Glencore gave a more upbeat projection for the zinc (and lead) market in 2014/15 at the Glencore-Xstrata Investor Day.

In the longer term, most analysts agree that the lack of investment in new mines, exhaustion of retiring assets and gradually recovering global economy will push the market into a pronounced deficit and apply upward pressure to prices, but as the world’s largest miner of both zinc and lead – not to mention the world’s largest zinc and lead trader – it would be fair to say Glencore probably has unique insight into the supply/demand dynamics of those markets, and its opinion is worth listening to.

During Glencore-Xstrata’s Investor Day this week, the firm’s team laid out their case for a market moving into pronounced deficit earlier than many think, and why the world could need up to 2 million tons of new mine capacity as soon as 2016.

Glencore’s Daniel Maté and Chris Eskdale reported that global zinc demand was rising at 5% per year, driven by a gradual improvement in key consuming sectors and regions, notably construction and automotive. Chinese zinc imports are said to be up 19% and galvanized zinc production is up 11.2%.

Even exchange stocks, which are above the historical average, are on a downward trend, although the financial stock-and-carry game has been distorting exchange traded stocks in recent years, making them less of an honest reflection of underlying demand. The market has been in deficit for the last seven quarters, according to Glencore, a tally disputed by some analysts such as the World Bureau of Metal Statistics, but supported by the physical premiums being charged in the market. 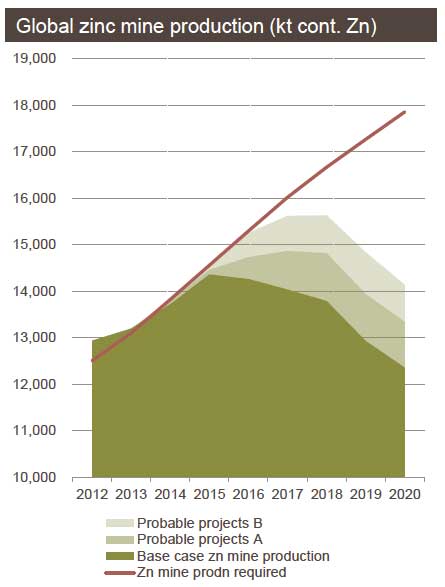 The firm sees no reason why 5% annual demand growth will not continue, as global growth (particularly in buoyant automotive and recovering construction sectors) drives demand upwards. That adds roughly 600,000 tons of demand to the market every year, adding 2 million tons by 2016 and 5 million tons by 2020.

With low zinc prices deterring investment in new projects and mature assets like Century likely to be retired over the next five years, the resulting shortfall is going to drive prices upwards as the ability to bring new capacity, even to ramp up existing capacity, will inevitably lag demand. In general, the majors are not interested in new zinc projects and as Glencore points out, the market is largely devoid of juniors. So although the firm is well positioned to add more capacity from its existing facilities, even the market leader is not going to be in a position to meet the shortfall.

Not surprisingly, speakers did not give a timeframe to increases in market prices, but the arithmetic suggests next year could begin to see some significant upward movement. Physical premiums will be an indication of how tight the market is getting and buyers would be advised to keep a close track on both exchange prices and premiums in order to cover forward when the trend begins to take shape.

Get even more detailed metal market forecasts at our upcoming commodity conference – click below!