How Platinum Price Forecast Affects Lonmin Plc as an Investment 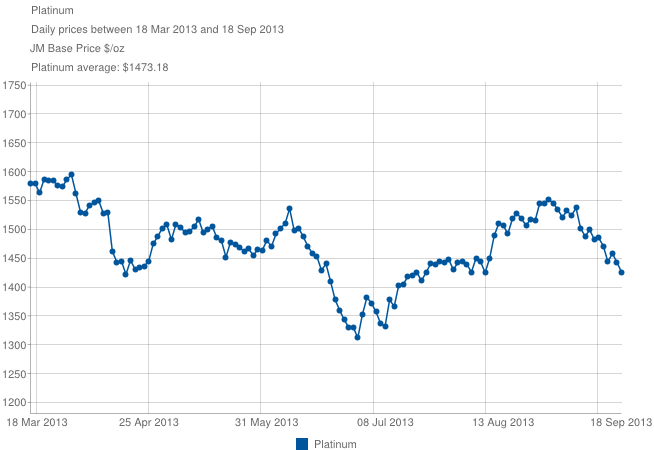 Although the platinum price has risen to nearly $1,600/oz and dropped to nearly $1,300/oz, it has averaged about $1,473 this year. RBC sees the average rising to $1,800/oz next year, improving Lonmin’s value to the market as a whole – and especially to Glencore as a stakeholder – and bringing much-needed relief to platinum producers, who are said to be below all-in break-even at current prices.

Prices could spike if labor unrest worsens in South Africa, but that aside, demand is likely to be the main driver next year. Jewelry, which accounts for roughly 35% of platinum demand, is expected to be flat relative to previous years, but auto demand is expected to pick up.

Just how much? Let’s look at it by the numbers.

The US hit 17.6 million units annualized in August according to Wards Auto, for the first time returning to pre-crisis levels. According to the China Association of Automobile Manufacturers, China’s auto production was 1,677,178 units in August, 11.70% over the same period last year.

From January to August this year, China automobile production reached 14,012,211 units, rising 12.36% compared with the same period of last year.

Meanwhile, China is moving to tighter emission standards to reduce pollution, thereby increasing the PGM demand per vehicle. Only in Europe have car sales fallen for six of the first eight months of the year, falling to the lowest levels since records began 23 years ago. Auto sales are a function of disposable income and confidence in the future, both of which have been hit in Europe, but after a period of calm in the EU debt markets, should begin to turn next year.

With growth in all three major auto markets, 2014 could well see a significant upturn in platinum demand – and with it, a rise in prices. At which point, with labor issues more settled, Lonmin will look like a much more attractive proposition to be put on the sales block.

In the meantime, no doubt, Glencore will use the time to better understand their investment and apply the considerable production and marketing expertise of Messrs. Nagle and Smith to assist in managing Lonmin’s current challenges and position the firm for eventual sale.

It will go on the sales block – just not any time soon.

Don’t miss the first part of this article.