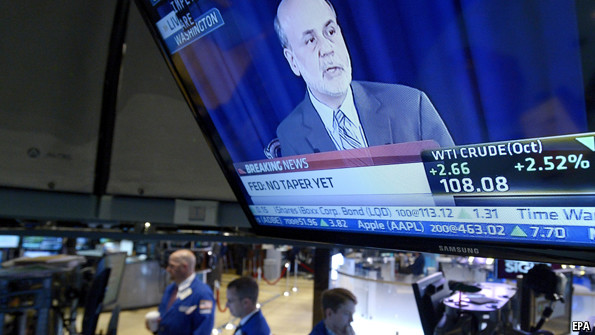 We’ll lead with perhaps the biggest economic news of the month – that Ben Bernanke and the US Federal Reserve shook things up by….doing nothing.

Essentially, the Fed said it would continue its QE ways, buying $85 billion worth of treasury and mortgage bonds and keeping the federal funds rate between zero and a quarter-percent in the foreseeable future. Which basically means that the central bank doesn’t have crazy amounts of confidence right now to pull back on their levers, with unemployment figures unimpressive and inflation forecast to rise.

2. The Core of Glencore? Not Lonmin – Yet

Stuart Burns delved into Glencore’s investment strategies surrounding their stake in platinum producer Lonmin. Although Glencore, which acquired the stake after teaming up with Xstrata, doesn’t quite consider this part of their business as “core,” they may just realize that Lonmin could be good for them later – if platinum prices hold up, of course.

Kennemetal sure took hold of some strategic tungsten operations this past week, acquiring Allegheny Technology’s (ATI) tungsten materials business. Lisa Reisman speculated as to why Kennemetal’s move may bode well for other tungsten suppliers in the industry, as more and more activity has been coming down the pike to lock up conflict-free supply.

Finally, the big ship that couldn’t is finally going to get a proper burial. Get a load of how much steel has been used to facilitate the uprooting of the Costa Concordia, the biggest scrap operation of the year by far.

Have you signed up for MetalMiner’s newsletter yet? How about MetalMiner’s RSS feed? Don’t miss the latest updates by getting them delivered directly to your email inbox!