Although China cries that the Trans-Pacific Partnership is out to quash the effectiveness of its state-owned enterprises (SOEs), other countries aren’t necessarily seen as saints.

In Vietnam, SOEs are used by senior Communist party officials as a cash cow for favored projects and sometimes as personal piggy banks, this FT article points out. Meanwhile, in the US, Fannie Mae and Freddie Mac have been given, and arguably continue to have, state support in one form or another. Exceptions are likely to abound, even though for many US firms this remains a major complaint when viewing unfair trade practices.

All countries have sacred cows for which they want to secure special exemptions. Japan has rice, wheat, beef, dairy products and sugar; the US and Canada want protection for their dairy industry, and Vietnam for its textiles. More than anything, these special exemptions are likely to be the biggest hurdles and the cause of the most intense negotiations.

Efforts to give greater protection for intellectual property are seen in more advanced economies as a basic requirement for technology investments, but are seen by emerging economies as favoring the advanced at the expense of the poor, which have traditionally absorbed technological advances through copying, according to the FT.

Although the US and Japan among the current TPP members dominate the volume of international trade in the region, for smaller countries the impact could be proportionally greater as their economies are more reliant on trade, as this graph from the FT illustrates. 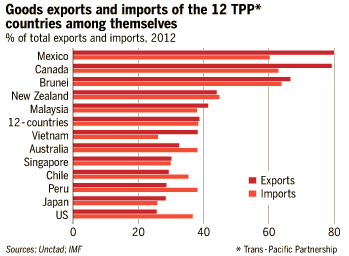 Still, the idea probably has a greater chance of success than the WTO’s Doha agreement had, if for no other reason than it should be more practical to gain agreement among 12 countries than 157, even if the 12 range from Communist Vietnam through to economically laissez-faire Singapore.

A concurrent agreement the US is working on with the EU could, potentially, see two-thirds of global trade covered by just two interlocking agreements, but as optimistic as supporters are that the agreement will be reached in the first half of 2014, the reality could be further back.

Ultimately, though, for firms engaged in the Asia-Pacific marketplace, either as producers, investors, purchasing or sales, the ramifications of an agreement could be profound – if for no other reason than it being worth keeping developments under review.