Coking Coal Price Forecast Looks to Firm Up in Q4 2013

Coking coal is the sometimes-overlooked sister of iron ore, but as a measure of steelmaking activity, it is every bit as important. This is particularly true since, like iron ore, there is a very significant seaborne market giving transparency to prices and demand. 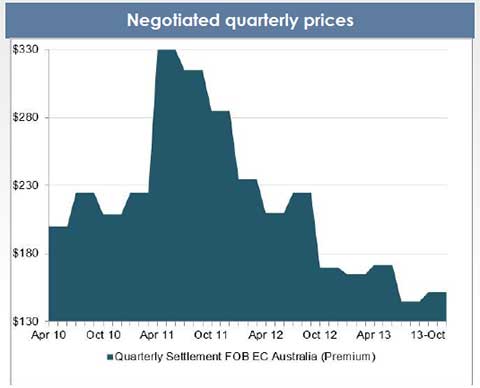 As with iron ore, coking coal prices have come off their highs of 2011 and for similar reasons, increased supply has given buyers more options; and although demand has continued to rise with increasing steel production in Asia, particularly China, increased supply from Mongolia and Russia has supplemented Australian and Indonesian sources.

Coking coal prices took a dip this year (see above), but have firmed a little since the summer on supply disruptions from Russia and Indonesia, the TSI tells us, perversely just as demand has taken on a downward trend in China and Europe.

The TSI reports Chinese steel mills had mostly finished re-stocking ahead of the current holidays, and anyway, demand for Australian coking coal has been sluggish as Mongolian supplies have been ramping up. Chinese billet and rebar prices were mostly weak throughout the month of September and this weighed on steel mills’ imported coking coal-buying interest.

China is a producer of coking coal, and as with iron ore, import volumes are balanced by the cost of domestically supplied material. So the narrowing price gap between domestic coking coal and imported coking coal helped further curb demand. The spread itself was at an average US$3-7 per metric ton for much of the month, according to the TSI’s report.

India is also a significant importer and demand there has firmed a little during the summer, but the volatility of the Indian rupee is expected to weigh on demand in the fourth quarter with consumers not buying any more than their immediate need.

Generally, though, the TSI sees demand and hence prices picking up in Q4 as Asian mills re-stock and a stable if depressed European market resumes imports after a period of falling demand.