We won’t give away all 10 things most likely to happen to upset metal price trends in the 2014 market – that was reserved for you fine folks who made it to our live conference last week in Chicago, Commodity/PROcurement EDGE – but we will give our loyal readers a bit of a taste.

In the next few weeks, of course, a lot on the macroeconomic landscape depends on what the US Congress plans to do with the looming debt ceiling situation, as the less-important government shutdown lurks in the background. (For example, according to Carson Wealth, government funding has expired 10 times since 1981, and the government has closed down each time – to minor effect on overall GDP. However, a debt default could have worse consequences on the manufacturing sector.)

But from a market fundamentals standpoint, here are three events that could certainly shake up industrial metals markets in 2014, and, by extension, how your company should look at its buying approaches.

Looking at historical iron ore price trends for the last year or so, we can see the market peaked at around $160 per dry metric ton for 62% Fe in Q1 2013, while troughing hard in early summer, flirting with the $100 per dry metric ton level for 58% Fe. 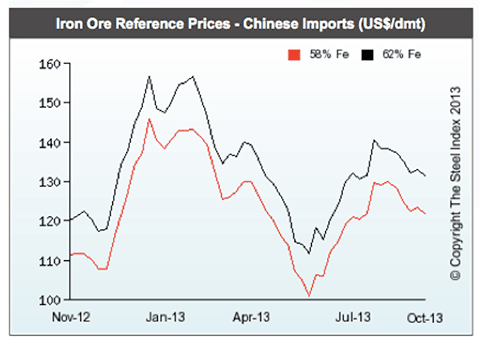 Prices today are holding a bit higher than they were at the same time in 2012, but there are many signs that have us worried about potential effects on global steel markets.

MetalMiner believes that iron ore prices could have much further to fall in 2014 – if not outright collapse, definitely a flattening – based mainly on supply factors.

The issue around iron ore prices is that some are calling for a rather large price drop because a lot of new material is coming onto the market. For example, the Sydney Morning Herald very recently reported that the Big Three iron ore producers in Australia – Rio Tinto, BHP Billiton and Fortescue – are about to announce even higher Q3 and Q4 iron ore production, slapping supply-glut worries in the face.

These companies account for some 70 percent of the seaborne iron ore trade, which depends on Chinese demand. However, HSBC’s China Manufacturing PMI has seen recent dips below the 50 mark, which worries us: 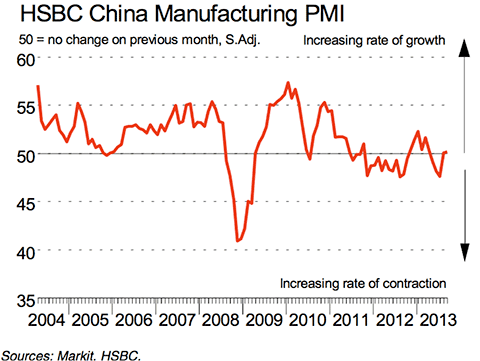