ISM's PMI Up Against Federal Reserve Data: Who's Right?

Supply Chain Management Review recently published an article that questioned the validity of the most recent ISM manufacturing ROB (Report on Business), which featured a robust September PMI reading of 56.2, up from 55.7 in August. The essence of the SCMR article suggested “no other data shows such strength.”

The analysis reported on by Supply Chain Management Review came from IHS Global Insight economist Michael Montgomery. The article also mentioned that the European inventory cycle turning will kick things up a bit, “but most likely not to the degree suggested by the ISM data.”

The article quotes Montgomery as saying, “We firmly believe the times are better in manufacturing, and the rest of the year looks better still—just not this good when the ISM-manufacturing stands alone in reporting it.”

MetalMiner won’t take a position defending ISM data (we haven’t analyzed how the data is gathered or calculated), but based on our own monthly metal price trend reports, we can easily suggest several possible reasons as to why the ISM data came in so strong.

First, the article suggested the Fed’s data didn’t appear that rosy for September’s economic landscape. Yet, on Oct. 8, 2013, William Strauss, senior economist and economic advisor in the economic research department at the Federal Reserve Bank of Chicago, spoke at our own Commodity/PROcurement EDGE event and highlighted the upward movement in US industrial output, as evidenced by this chart: 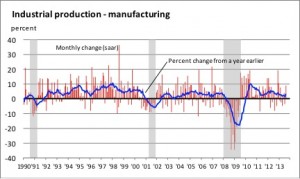 Montgomery mentions sources such as these regional Federal Reserve studies, along with data from commercial intelligence provider Markit, who publishes its own PMI index (not to be confused with ISM’s PMI metric). We will dive into how best to make use of some of these different commercial and non-profit (governmental and NGO) providers in the future. For now, it’s important to consider factors such as sample/selection bias, measurement bias, reporting periods, seasonality effects, etc. By understanding these factors before “triangulating” the data sources, it can greatly help explain some of the variation found in the individual datum (the singular version of the Latin plural data – drop THAT factoid into your next cocktail party conversation!). In fact, we do this to some extent in weighting the hundreds of data points that we collect for our key MMI indices.

We will continue this article as a follow-up post.