We spend quite a bit of time here at MetalMiner analyzing metal price trends to better understand not only what moves markets, but also where anomalies may exist and what that means for metal buying organizations. One trend that continues to trouble us involves the poor price performance of the rare earth metals sector.

It currently stands as our worst performing metal price index.

Check it out for yourself. Download the free Monthly MMI® Report – covering the Rare Earths market.

But when we take a closer look at the underlying price data, a new story emerges. That story goes something like this: the light rare earth metals (e.g., cerium, which makes up over 48.8% of Molycorp’s production, and lanthanum) continue to struggle price-wise:

These metals have failed to increase in price largely because of a severe over-supply situation. In essence, China can comfortably supply the world with these light rare earth metals. And that directly impacts companies like Molycorp and Lynas. 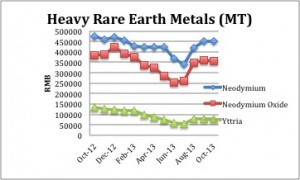 With China’s more aggressive stance towards cracking down on illegal mining operations (after all, it doesn’t take much for an entrepreneur to leach rare earths), the new reality on the heavy rare earths suggests that China, like many of its neighboring countries, also practices Resource Nationalism (banning or limiting the export of one product in favor of producing the higher value-added product). In this case, the Chinese would prefer to do the separation and processing of rare earth metals, not the mining.

In a follow-up post we will explore what that means for rare earth mining companies outside China.