MetalMiner readers are not likely to pay too much attention to a Congressional water bill unless it somehow plays a role in the cost of moving steel or green tractors or heavy earth-moving equipment or, for that matter,  airplanes. But when some of the nation’s largest exporters line up in support of something that also has bi-partisan Congressional support, we take notice.

Wednesday night the US House of Representatives passed the  WRRDA (the Water Resources Reform Development Act, as it is called in the House) by a 417-3 vote. Before the House vote, the bill had a 36% chance of becoming law, assuming the President signs it. Now the odds go much higher.

So why should anyone care about this bill?

Consider a few facts about the state of our US waterways and infrastructure:

And Collis Jones, Director of Congressional Affairs for John Deere, recently said at our own Commodity/PROcurement EDGE:  “The lack of infrastructure spending is critical to exporters like us.” Jennifer Diggins, Director Public Affairs for Nucor, concurred stating, “this bill is long overdue and is much needed to maintain the integrity of our port system.” 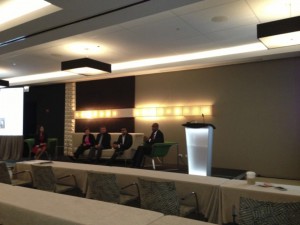 Ironically, the only backlash over the bill involved a clash between House Republican leadership and those backed by the Heritage Foundation (Heritage Action) and Club for Growth (these groups wanted to force the de-funding of Obamacare as a central tenet of any debt ceiling deal). Their opposition to WRDA contained a rather long list of issues, primarily around streamlining and reducing the number of studies, project delays, and cost overruns. But in the end the bill passed the House with almost nearly full support.

Nevertheless, WRDA (Senate version) or WRRDA (Water Resources Reform Development Act, House of Representatives) has a great shot  of becoming law. Now we wonder, what are the odds that the next debt ceiling fight will resolve at midnight on February 6, 2014???