The British National Health Service has banned the use of metal-on-metal (MOM) hip replacements, after evidence of unacceptably high failure rates. Regulators insist that the NHS stop using any hip replacment implants with a failure rate higher than 5% over five years.

According to the Telegraph, the warning from the National Institute for Health and Care Excellence (Nice) was issued after research uncovered failure rates as high as 43% among some of the implants. MOM resurfacing models made by the likes of DePuy, Smith and Nephew, and Zimmer (including the Adept, Cormet 2000, Durom, Recap Magnum, and Conserve Plus) have been banned, in addition to the Corail/Pinnacle ceramic on metal devices.

The British Medical Journal has been much absorbed by this topic and has an interesting paper on its website. According to the BMJ, the conventional total hip replacement consists of a metal head with a polyethylene cup. But these joints don’t last forever. Over time the plastic cup wears away against the hard metal head. Younger, more active people are especially likely to require early revision surgery to replace the worn-out joint.

So attention turned to more durable MOM joints that use a combination of cobalt and chromium. And the fear that metal ion would contaminate the bloodstream and damage  surrounding tissues was countered by assertions that more precise engineering around the sphericity, surface finish, and metallurgy would mitigate the risks. Cobalt ions in particular have been shown to be carcinogenic and to cause destruction of tissue and bone around the joint between the head and stem of the implant.

DePuy (a division of Johnson & Johnson) is quoted as saying that in patients with well functioning devices, levels should be no higher than 2 μg/L. However, studies show that blood cobalt concentrations generated through wearing these newer MOM total hip prostheses can reach over 300 μg/L. This is 600 times higher than physiological levels of cobalt (most healthy people have about 0.5 μg/L of cobalt in their blood).

More than 60,000 patients in England and Wales have received metal-on-metal devices since 2003, when the National Joint Registry first began to record procedures. In the US, the figure is closer to a million, and although manufacturers knew of these toxicity issues as far back as 2007, the procedure was still being marketed up to 2012.

According to the NY Times, although a US hospital may charge you upwards of $13,000 for a MOM hip replacement device (just the device, mind you, not the operation to fit it), the true cost of manufacture is closer to $350. Zimmer, Biomet, and DePuy had joint implant sales exceeding $1 billion (knee and hip combined). 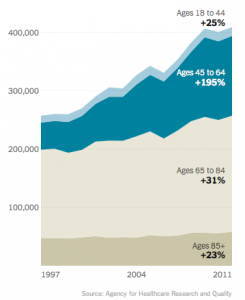 Demand for replacement joints will not evaporate overnight after this ruling. Indeed the industry is set to grow substantially as we age and medical progress keeps us active. But a revision to traditional metal in high density polyethylene or even ceramic in polyethylene would see a sharp reduction in demand for the casting of cobalt-chrome and cobalt-chrome-molybdenum products.

This has been a lucrative and recession-resistant market for many years, and this ruling is likely to have far reaching implications.