The iron ore market has been hard to discern in terms of future direction in recent months.

Supporters, led by the major iron ore miners like BHP Billiton and Rio Tinto, have confidently declared that demand will remain strong for several years to come and indeed have put their money where their mouth is by continuing to invest in new facilities to increase raw material supply.

Detractors have pointed to what they consider an overheated steel market in China (certainly a steel market with considerable excess capacity) and attempts by Beijing to cool a robust housing market, as evidence that steel production has to fall or at least flatten. At the same time, they say all this new iron ore mine capacity is going to flood the market just as it peaks and will cause a pronounced fall in prices – how low?

Some are suggesting even sub-$100/ton next year.

And so far, the supporters have it.

Reuters reports China’s iron ore imports are up 9% in the nine months to September over the same period in 2012, with the third quarter recording the first, second, and fourth-highest monthly totals. October imports are likely to be strong as well, given the 3.2% month-on-month rise in September shipments from Australia’s Port Hedland, the main export port for iron ore. 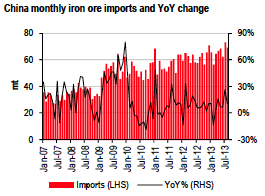 In HSBC’s Quarterly Metals & Mining Review, the bank observes that Beijing’s mini-stimulus spurred demand just when the seasonal summer de-stocking cycle would have been expected to see a drop in iron ore demand. Indeed, the bank sees global crude steel production growth rise in 2013 from 2.3% to 2.7% and raised their estimate of 2014 growth from 2% to 3%, much of which will be driven by China.

In HSBC’s opinion, and pricing so far bears them out, the lack of a destocking cycle has meant iron ore prices have proved resilient in Q3, and they think that this is likely to continue into year end.

Strong iron ore imports are not going into inventory, as the above graph shows. Iron ore inventory is down to levels not consistently seen since 2009-10, suggesting imports are being consumed by steelmakers rather than stockpiled. 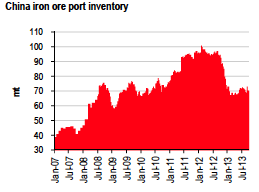 The Steel Index (TSI) reported recently that inventory at Chinese small-to-medium-sized steel mills has been holding steady at around 30 days of supply since the early summer, and port stocks have actually fallen slightly as a “weeks of cover” figure in Q3.

Nor are imports simply substituting domestic production. Although imports briefly peaked at 95% of Chinese market iron ore supply at the end of last year, the level dropped back sharply to a longer-term average figure of around 65-70% for much of this year.

But steel demand is not looking as solid as it was and many can’t avoid the sense that at some point Chinese steel production must peak. It has risen relentlessly from about 15% of global production at the start of the last decade to 50% today.