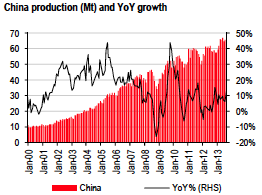 This is the second part of a two-part series on the latest iron ore price forecast. (Here’s Part 1.)

As the graph above shows, China’s steel production is still growing at 10% this year, compared to a largely flat market in North America and a contracting steel market (this year as a whole, anyway, recent signs suggest some glimmer of growth may be returning) in Europe.

However, all is not as positive on the demand side for steel. Overcapacity in China appears to be impacting prices there.

Although China’s recent macro Purchasing Mangers Index (PMI) numbers are positive, Reuters reports the official PMI hit an 18-month high of 51.4 in October, while the HSBC measure reached a seven-month peak of 50.9, at the same time the PMI for steel was heading the other way. The steel PMI dropped for a second month, falling to 47.5 in October from 49.2 in September, according to the China Federation of Logistics and Purchasing, which compiles the index.

Last month average steel production figures showed small falls, steel output was down 1% to just over 2 million tons in the second 10 days of October, following a decline of 1.1% in the first 10 days. Finished steel inventories may also be rising, up 3.1% since August to 13.2 million tons. 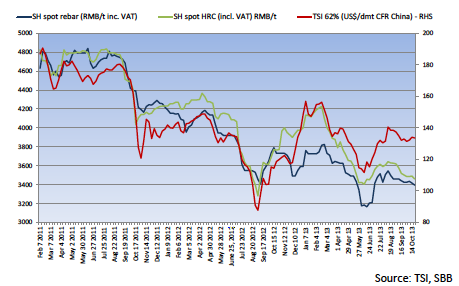 That won’t continue indefinitely – sooner or later, either iron ore prices will fall, or steel prices will reverse their falls and begin to rise again.

What Is the Iron Ore Price Forecast?

HSBC stands more towards the bullish end of the scale, revising their 2013 average from $123/ton to $134/ton in the light of experience this year and holding 2014 at $115/ton, with a reduction to their earlier estimates only coming through in 2015 numbers, down to $110/ton, as new mine supply begins to really impact the supply market.

In the bank’s view, a proportion of this promised supply will be delayed with the peak year for new additions not hitting until 2015. Next year, we will see growth in Australia as FMG records some of the first growth from its 150-million-ton/year expansion and Rio Tinto starts to fill its expansion to 290Mt/y. Rio and FMG should continue growing in 2015 as Vale adds a further 20Mt to output in that year.

This gradual ramp-up in supply will be absorbed by rising steel production in the bank’s view, but contrasts with investment bank UBS, which forecasts a 272-million-ton surplus by 2016, pushing prices below $100/dry metric ton that year.

Outlook for the Iron Ore Market

Much will depend on demand for steel products holding up capacity utilization levels in China.

The new government in China will be coming out shortly with policy decisions for growth and the economy in 2014 and beyond. Policies announced at that session, scheduled for November 9th through 12th, may tell us a lot about the future for the construction, infrastructure and heavy manufacturing sectors’ growth prospects in 2014.