The Changing Landscape for Platinum (Part 2)

Read the first part of this article.

Supported in recent years by Beijing’s encouragement to buy precious metals, a rising GDP is encouraging the population to divert a proportion of their savings into precious metals, similar in ways to India’s long-standing cultural affinity for gold as a store of personal and family wealth.

Both platinum imports and daily volumes on the Shanghai Gold Exchange have risen strongly in the last two years, illustrating the strength of domestic demand. 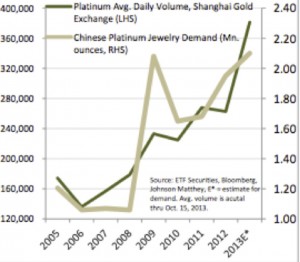 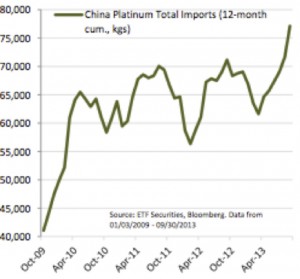 We have to be careful to take ETF Securities’ stats and apply caution to their conclusions.

The numbers may be accurate, but ETFS is naturally bullish on demand for obvious reasons. The total demand for platinum has been stagnant at around 8 million ounces a year since 2005, with the exception of the recession year in 2009, when demand dipped to 6.8 million ounces.

The European car sector is recovering and showing some strength in the UK and Germany, if still weak in France and Italy. Auto-catalyst demand is expected to pick up next year, and jewelry demand is expected to continue to rise strongly. Even with the growing use of palladium in combination with platinum in catalysts mitigating the benefits of a rise in auto construction support would be taken from rising auto sales. 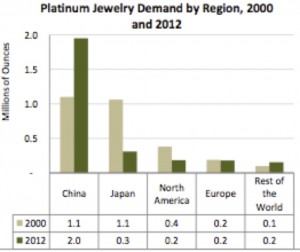 The caveat is that jewelry demand in China appears price-sensitive; if supply constraints in South Africa were to boost the price, say, demand would slow in China, but with miners holding an estimated 1+ month of supply, even a widening strike is unlikely to constrain metal supply significantly.

ETF Securities makes one final observation worth noting: with the platinum price now around 25% below its estimated all-in cost of production, and China demand expected to rise further in 2014, the platinum price remains well-supported for next year and beyond.