Copper, Nickel Buyers: What a Technical Price Analysis Tells You

LME copper and LME nickel 3-month prices fell for the second consecutive week. Copper dropped by 4% from Nov. 1 to last Friday, while nickel fell by 6%. The question is, will we see these prices continue their slide in the coming weeks?

Let’s first go back in time and take a look at both metal price charts beginning in 2007. The chart below showcases nickel: 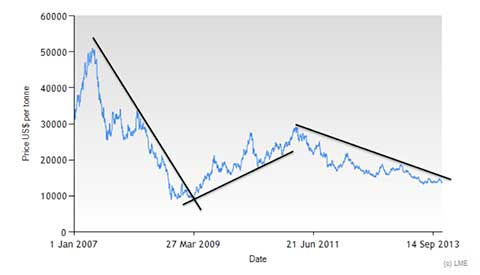 As we well know, markets generally don’t move in straight lines. They are usually characterized by a series of zigzags with fairly obvious peaks and troughs. The direction of these peaks and troughs forms the basis of a market trend.

The chart above represents daily nickel 3-month prices from 2007. The graph clearly shows three different long-term trends. A downward trend, from when prices peaked in 2007, an upward trend from 2009 until 2011 and now a downward price trend since March 2011. Generally speaking, major price trends tend to continue until something signals a trend reversal.

The following chart analyzes the copper market from 2007 to 2013: 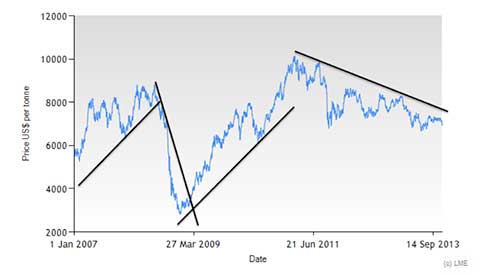 Similarly, copper prices (see chart above) saw an uptrend after the end of the recession in 2009 until 2011. Since 2011, copper prices have stayed in a downward trend.

From a technical analysis viewpoint, looking at the overall picture, copper and nickel prices will likely remain below certain levels. These resistance levels represent price levels where selling pressure overcomes buying pressure. Short-term corrections happen during major trend periods. This means that we can see a short upward trend inside a major downward trend and vice versa.

Let’s zoom in on both charts to see what has happened in the short term for nickel prices: 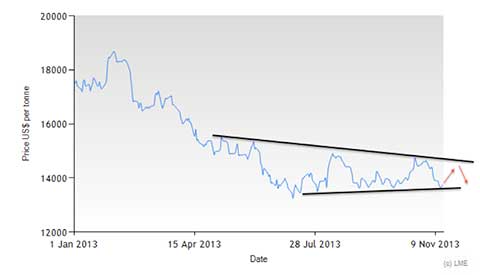 It should come as no surprise if in the next few weeks we see nickel prices increase and then trail back down, remaining between these supportive and resistance levels.

And with regard to short-term copper price trends: 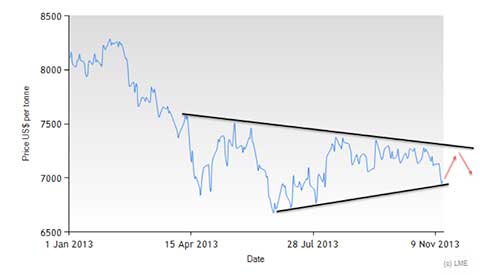 In the case of copper (see chart above), the same argument holds. Prices reacted on Friday after meeting a resistance level on Thursday. Whether both prices exit through the upper or the bottom line might determine subsequent price levels.

Don’t be left out in the cold when buying copper or nickel – check out MetalMiner’s price forecasting service.