As we head into Thanksgiving week, we figured a short-to-medium-term steel market outlook/forecast was in order earlier, not later – this way, you can focus less on business and more on family (unless you get bored, of course, in which case come back to the site and check out the “Best of MetalMiner–Q3”!)

Or you could always hit the steel distributors on Black Friday…

But we digress: first up, mining production outlook from one of our favorite economists.

A bright spot, according to Alan Beaulieu (one-half of the Beaulieu Brothers) of ITR Economics, is encouraging numbers in mining equipment production domestically: 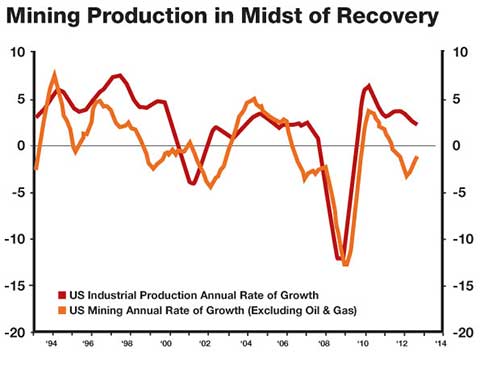 According to Beaulieu, although the US economy should see a downturn in 2014, “[The] increased willingness for businesses to invest in new equipment has trickled down to mining machinery new orders, which are 5.6% ahead of last year. Mining machinery inventories are currently up 9.6% from 2012, but the rate of change is slowing, which is a good sign for equipment production.”

From what MetalMiner is currently seeing in the China market, steel capacity won’t be cut nearly as much as Western producers want, and “even if imports into the US or Europe are not rising, China’s exports to other markets are supplanting exports from the US or Europe, depressing capacity utilization and hence prices,” as Stuart Burns wrote recently.

S&P backs this up by asserting that new production from the big players – Rio Tinto plc, Vale SA, BHP Billiton and Fortescue – could equal about 5 percent of current production by 2015. “We maintain our expectation that global demand will rise by about 2% in 2014, primarily because of demand from Asia,” advised S&P, according to Mineweb’s report.

Prices of ferrous scrap have been trending higher for November; the US HMS #1 price on the MetalMiner IndX℠ has risen nearly 9 percent this month, while US shredded scrap price on the IndX℠ has risen 7.5 percent. “Should we expect to see even higher prices next month?” wonders Bob Garino, formerly of ISRI and now opining for Export Advisors.

“That’s usually the case for December but it’s not a sure thing,” according to Garino. “A lot depends on domestic flat rolled fundamentals going into the new year, import penetration, as well as the level of discretionary mill buying for December and January.”

“Steel prices have been in a narrow band since mid-2012,” according to Raul de Frutos, MetalMiner’s lead forecasting analyst. “Cold-rolled coil (CRC) has remained between $670-770/short ton for more than a year (see graph below), something that we haven’t seen in a while.

“A weak upward trend during the past weeks suggests nothing but small movements in the coming weeks,” de Frutos said.