If you thought our conflict minerals compliance coverage was all spreadsheets and bullet points, think again.

Turns out there’s a documentary for that.

Well, not on complying with the SEC’s Conflict Minerals Law, per se, but about how “the conflict mineral campaign” – including the Dodd-Frank Act and ensuing SEC law – “has affected the daily lives of the Congolese people in the DRC,” according to the documentary film’s official site.

What the Documentary’s About

Titled “Obama’s Law,” the documentary is the brainchild of Seth Chase and his producing partners, who, understandably, have an interest in investigating the advocacy/human rights sides of this issue. Why’s it called “Obama’s Law”? According to their Kickstarter site, the filmmakers asked local Congolese why they called Dodd-Frank “Obama’s Law,” and they responded, “We say Obama’s Law because the law that stopped the mining here came from America.”

Obama=America to Congolese folks, apparently, but that’s neither here nor there. Most of the completed footage is handsomely shot, and I can say these gents have found a few compelling characters to give voice to their opus.

(If you’re intrigued further, you can find out from Chase directly in a video posted on their site.)

Believe us, we know all about how much of a pain it is (and will continue to be) for US OEMs and suppliers to comply fully with the SEC Conflict Minerals Law. (We even hosted a conference about it last May.) Doing due diligence, submitting spreadsheets and forms takes time, and creates headaches for US-based metals buyers and suppliers.

But what about those suppliers that are not based in the United States?

That’s where Matthias Wachter comes in. Wachter, the director of the Department for Security and Raw Materials at the Federation of German Industries (Bund Deutscher Industrie, or BDI), gave the filmmakers an interview, and in addition to paying lip service to the Congo-Free argument, he alludes to how tough the landscape is even for German suppliers: 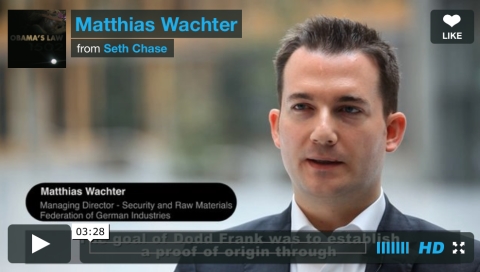 The takeaway here? The BDI has 38 member federations and represents the interests of 100,000 businesses with 8 million employees, according to the association’s site. If Wachter is truly a singular voice for most German business and manufacturing, then it proves that more than just stateside companies are concerned about conflict minerals compliance.

If you’re a supplier up a creek without a paddle, learn more about a simple compliance solution.

Or just read the best coverage on conflict minerals compliance for manufacturers.