By all accounts, the US housing market hasn’t looked this sweet since before the 2008-09 recession.

Whether one measures the pick-up by new home sales, average re-sale home prices, the shortage of homes for sale, housing starts (still growing at a 25.9 percent annual rate of consumption, though down from March’s peak of 30.6 percent, according to ITR Economics) or housing permits – the data looks solid.

Reflecting the general construction market data, MetalMiner’s monthly Construction MMI® – which tracks prices of metals used within the construction sector – clocked in at 89 in December, an increase of 1.1 percent from November. The increase was largely due to rising beam prices in China as well as a spike in US shredded scrap prices. (Get the full price breakdown below.)

To put the housing market in context with total construction spending, for the month of October 2013 it made up 36 percent of the pie (based on a $908.4 billion spend): 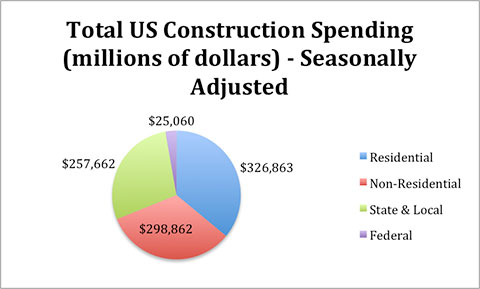 Total construction spending one year ago came in at $863.06 billion, so 2013 data shows a 5 percent increase. Federal spending also increased by more than 10 percent, while state and local government expenditures on construction-related projects increased.

But not all construction news appears positive. Non-residential spending fell by half a percent in October due to lower private power plant construction, amusement parks, and recreation centers, etc.

Takeaways for Metal Buyers in the Construction Market

Market watchers, including us here at MetalMiner, should pay close attention to the recent reforms announced by the central government in China. Many of those reforms may dampen infrastructure and construction spending in the near term, and that could impact steel prices especially.