Will Finished Steel Price Trends Break Further Away From 62% Fines?

After a relatively stable steel market in China in October and November, the Chinese government’s reforms in the wake of the Third Plenum of the Communist Party could be a wild card. This post continued from Part One.

HSBC’s Chinese manufacturing PMI came in for November at 50.8, down only marginally on October’s 50.9 and, again, not indicative of a trend apart from being steady; but apparently, according to TSI, a separate PMI survey focusing on the steel sector rebounded slightly to 49, up from 47.5 for the same period, indicating continuing slow contraction.

A disconnect has, however, developed this year between finished steel prices and iron ore as this graph from the TSI shows: 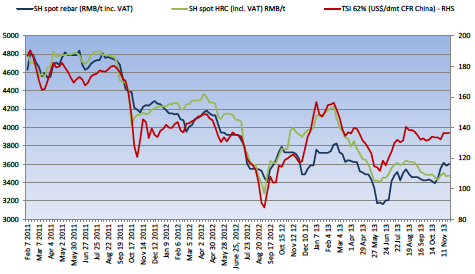 What to make of this disconnect?

The recent drop in HRC prices relative to rebar may be a reflection of a weakening manufacturing sector compared to a still reasonably robust construction market, but there is only a couple of months of data so it could be too early to tell.

So iron ore has been held up by steel demand, and increased iron ore supply, such as it is, has so far been absorbed by an industry still growing at close to 10% per annum. As new iron ore projects come on stream and if steel demand slows further, an inflection point could arrive next year when prices begin to fall.