There has been considerable speculation that over-capacity in the Chinese steel industry, slowing growth, particularly in the industrial sector, over-investment in iron ore mining operations and Beijing’s squeeze on credit and construction would result in a fall in iron ore prices.

In practice, prices have held up well, even firming a little this month, according to The Steel Index (TSI)’s Monthly Iron Ore review. TSI reports their 62% Fe fines benchmark average rose 2.8% in month-on-month trading to $136.32 per dry metric ton in November with a month high of $137.10/dmt. The price traded within the month in a very narrow band of just $2/dmt, showing very little volatility in spite of the customary October drop in imports due to the week-long National holidays.

Although the holiday typically slows the movement of iron ore through the ports, stocks have remained at about one month’s supply, down from this time last year when it was running at 1.5 to 1.75 months, as this graph of Iron Ore Port Stocks from the TSI illustrates: 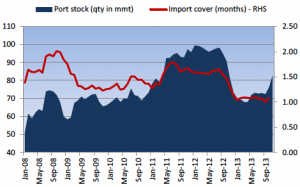 So was all the ballyhoo about falling iron ore prices just a bunch of hot air? Well, in the short-term maybe the answer is yes. Here is some food for thought.

Winter re-stocking is currently underway as China’s northern provinces, where much of the domestically produced iron ore comes from, freeze over in December for the winter. India remains largely closed to China as a source of supply and in recent years both Brazil and Australia have experienced supply disruption during their summer months due respectively to rain and cyclones.

So, bearing in mind that steel production is still growing at about 10%, according to this TSI graph of Chinese 10-day crude steel production, in the short term prices could remain well supported: 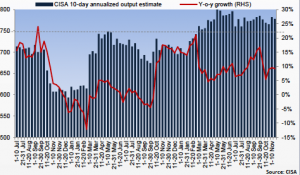 But supply options continue to expand – BHP Billiton will be shipping iron ore from its new Jimblebar mine in the fourth quarter and Port Hedland is ramping up export volumes. While underlying steel demand in China has been steady in October and November, the deep structural reforms outlined in the Third Plenum of the Communist Party’s conference in November have yet to be interpreted as to how they will impact steel demand in the short to medium term.