Every year, the Chinese government issues two rounds of allocations of rare earth export quotas, and this year’s first round indicates that 2014’s exports will the stingiest exports in five years.

Our friend and rare earth metals expert Gareth Hatch at Technology Metals Research featured some great coverage upon the announcement. Interestingly, one firm that usually receives export allocations, Inner Mongolia Baotou Hefa Rare Earth Co., is conspicuously absent from the first round list due to environmental issues at their facilities. Until those issues are “rectified,” IMBHRE Co. will not get specific allocations from Beijing.

Hatch lays out the last five years of China’s rare earths export quotas, and the graph below in and of itself tells an interesting story: 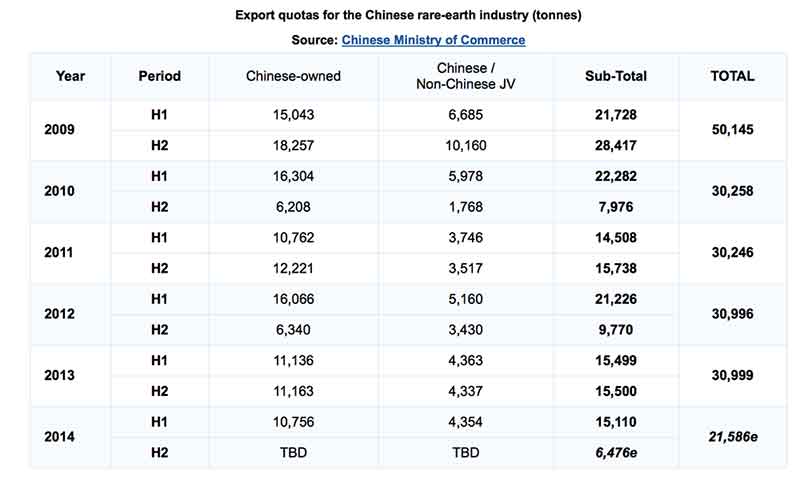 (Just to note, Hatch has thrown in his second-half 2014 quota estimate.)

However, here’s the key to all of this, from Hatch’s response to a comment on his story:

“[A]s you know, the export quotas do not reflect the reality of actual rare-earth exports from China, given the quantities that are exported outside of official channels. Sticking with the quotas though for a moment, if Inner Mongolia Baotou Hefa Rare Earth Co. is allocated a quota as part of the first round, and if it was similar to last year (455 t) then the total first allocation would be 15,565 t. If 15,565 t represents 70% of the total quota for 2014, then we could expect 22,236 t for next year. That represents less than 72% of the 2013 number. Either way, the numbers for 2014 are likely to be significantly lower than 2013.”

Of course, the quota hasn’t always been met: “China exported 16,265 tons in 2012, according to Customs, just over half the 30,966 ton quota for the year,” according to this article. But could this translate to higher rare earths prices?

MetalMiner will keep an eye on this – and whether it will affect movement on our RE price index, the Rare Earths MMI®, in 2014.