My oh my, does the copper market face a conundrum!

Just when miners’ projects are coming on stream and copper concentrate output is soaring, exchange-traded stocks are falling and physical delivery premiums are rising. What on earth is going on? Well, one of our favorite analysts Andy Home of Reuters sure has some interesting observations, and you can make of them what you will.

No one is questioning that mine concentrate is in surplus, he says; the world’s mines generated an extra 854,000 metric tons of copper in concentrate in the first eight months of this year as new mines came on stream and existing mines completed expansion projects. Yet refiners increased refined copper output by some 330,000 tons less, producing just 526,000 additional tons of refined metal over the same period.

Naturally enough in a surplus market, refiners have ramped up treatment charges – and there is more to come. In Home’s opinion, treatment and refining charges (TCRCs) are set to skyrocket this year, from $70 per metric ton and 7.0 cents per lb, to $92 and 9.2 cents, respectively – the highest level in six years.

Indeed, treatment terms in the spot market are higher still. For example, one 30,000-ton tender for clean material to China went for $130 and 13.0 cents the other week. Meanwhile, exchange stocks have been falling, as this graph from Reuters shows: 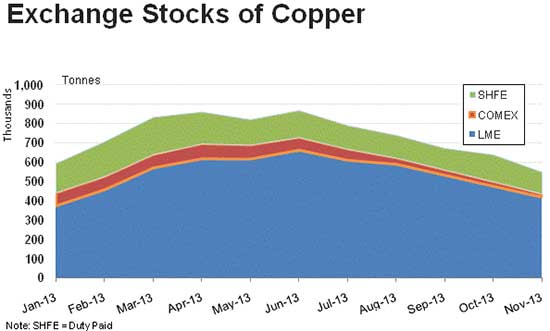 Not only have total stocks been falling, but metal still in LME warehouses has been queuing up to leave, principally in Johor in Malaysia, Antwerp and New Orleans. Indeed, so tight is the Asian market that only 8,300 tons remain in LME-registered inventory out there. 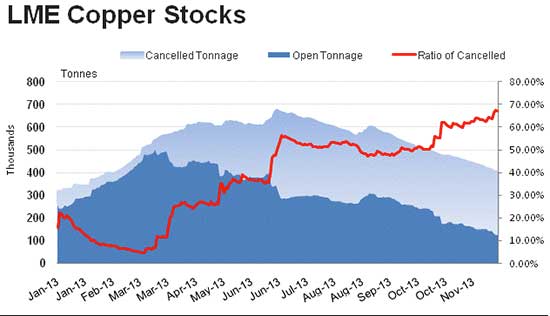 Yet perversely, just as you would imagine refiners would be ramping up capacity utilization and refining all they could get at these elevated levels, the market for refined metal remains super-tight.

Ahead: my take on the outlook for exchange copper prices.