Rising US HMS, Shredded Scrap Prices Likely to Continue into 2014?

In flat to falling metals markets, nothing captures anyone’s attention more than a sudden price increase. And basically, only steel scrap prices (and perhaps iron ore) fit that bill. 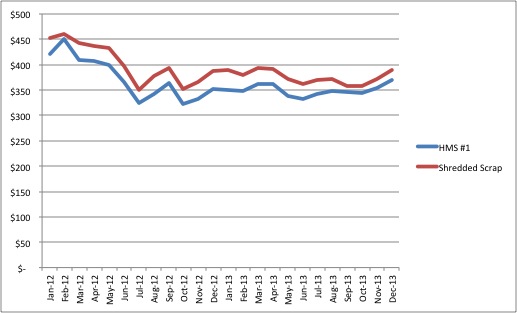 Let’s look to the iron ore markets for clues on scrap prices.

My colleague Stuart recently discussed the rising iron ore market. “So iron ore has been held up by steel demand, and increased iron ore supply, such as it is, has so far been absorbed by an industry still growing at close to 10% per annum,” he wrote. “As new iron ore projects come on stream and if steel demand slows further, an inflection point could arrive next year when prices begin to fall.”

So why should we care about iron ore prices and steel scrap prices?

As our friends at Gerdau Market Update recently indicated, iron ore and scrap share an 83% price correlation since January 2006. MetalMiner considers anything above 70% as “correlated.” Therefore, price trends for one may provide the economic tea leaves to read price trends for the other.

In addition, global steel production numbers will also continue to grow to 1.63 billion tons next year, according to ISRI. Meanwhile, Platts recently suggested the flat rolled products market “remains tight,” which has also provided a lift to scrap prices.

On the other hand, prices may trend to the downside based on USD values. In particular, Gerdau Market Update suggested in their  latest weekly report, “…when the value of the dollar increases the price of scrap decreases. This benchmark says that scrap is priced too high today.”

Moreover, they also suggest that scrap has crossed the scrap/oil threshold (scrap typically closely correlates with oil – 93%), meaning it no longer appears as a buying opportunity. Should the trend continue, according to Gerdau, scrap may become overvalued.

We tend to concur with the folks at Gerdau Market Update. Our own HRC and CRC price forecasts do not suggest any significant price increases. At the end of the day, steel demand will need to support scrap prices.

The question remains – will it?