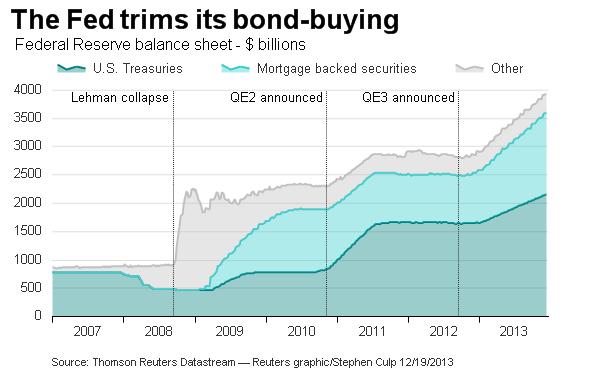 Well, they went ahead and did it – Fed Chairman Ben Bernanke and his disciples, wanting to clean house a bit before Janet Yellen takes over rather than wait until the new year, announced that the Fed would be buying $10 billion less in bonds beginning in January (down to $75 billion), after five years of easy-money policy.

Basically a signal that these folks feel the US economy can stand on its own two feet again, the Fed is optimistic that we’ll see lower inflation and unemployment rates, calling the latter to be in the low end of the 6-percent range by the end of 2014.

What This Means for Metals Markets

Using the aluminum market as a prime example, the specter of interest rates rising from their historic lows threatens the LME-warehouse stock and finance game and could cause anywhere from a trickle to a rush of surplus aluminum back onto the open market – which could ding prices.

As Stuart wrote yesterday, “eventual tapering and unwinding of quantitative easing will likely reduce liquidity in the financial system and raise the cost of money. The mere suggestion that QE may end caused near-panic in the financial system earlier this year, so when it starts in 2014, expect considerable volatility as investors juggle developments to discern the likely impact.”

The lesson here: let’s all keep a close eye on Yellen in the year ahead.

Get more MetalMiner analysis on longer-term trends in the Monthly MMI® Report.