It sounds like something Ernst Blofeld from a James Bond film may mastermind – “Millions of Tons of Metals Stashed in Shadow Warehouses” goes the headline in a WSJ article. But in a way, maybe it’s no so far from the reality of such a situation.

According to the WSJ, banks, hedge funds, commodity merchants and others are stashing tens of millions of tons of aluminum, copper, nickel and zinc in a hidden system of warehouses that span the globe, and it’s going on without oversight or even the merest visibility by anyone.

Just 12 months ago, aluminum stored in off-market warehouses, i.e. those outside of the LME system and hence unrecorded and largely invisible to the markets, was roughly equivalent to the 5 million tons held on the LME. Today, the LME has risen to about 5.5 million tons and the WSJ estimates off-market stocks could be a further 7-10 million tons.

We think that is conservative, both in the original estimates and current off-market inventory, but the point remains that global over-production is not a few hundred thousand tons; it is probably closer to 2 million tons, and these shadow stocks represent both a huge risk to the market and to producers’ future profitability. 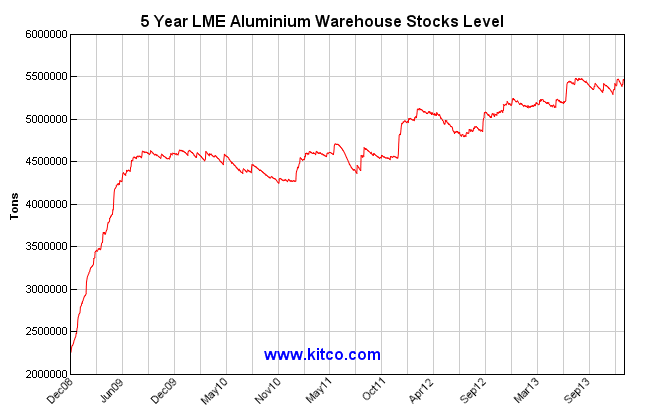 In the wake of the financial crisis, consumption dropped and inventory rose (see above) as hot money went looking for a safe haven.

Buying spot and selling forward on a strong forward price curve gave banks, hedge funds, and commodity merchants a positive return in an uncertain low-inflation market. That remains the case and the practice has spread to other metals, notably zinc and, according to the WSJ, nickel and copper too.

The concern in the short term is the uncertainty created by such large stocks of metal coming onto the market and being removed from the market with no transparency as to who is holding them, where they are held or when/why they are being bought and sold. This uncertainty creates price volatility and is one reason why Alcoa has called for greater reporting of who owns what among exchange-traded stocks.

Nick Madden, senior vice president and chief supply-chain officer with Atlanta-based Novelis Inc., is quoted as saying, “The risk here is that the metal gets controlled by fewer and fewer hands, whose interests and business model is probably conflicting with that of end users.”

RELATED: What Madden told MetalMiner on the LME warehouse scandal.