Now, we should caution that we are not personally great followers of the chartists, by which we mean those analysts who seek to predict future price movements on the basis of the shape of previous price curves.

There are plenty of situations they can point to where commodity prices have faithfully followed pre-determined waves, the peaks and troughs of which are predicted on the basis of their Fibonacci ratio analysis.

Fibonacci analysis is based on a series of numbers developed by Italian mathematician Leonardo Fibonacci in the 12th century and while I am not going to go into any more detail here on how it works, the essence is the technique is supposed to predict likely inflection points where the price will find support or resistance, and as a result slow its fall, or rise, or even change direction.

The fact that I don’t place great store on a system developed by the undoubtedly eminent mathematician is not to say analysis using his principals do not influence the market.

Enough traders use chartist direction signals for their prediction to become, to an extent, self-fulfilling. Like all analysis, of course, it is open to interpretation; depending on when you start the timeline for the wave analysis, you can see short-term wave patterns in conflict with long-term patterns, so to say it’s complicated is probably an understatement.

Nevertheless, as a New Year exercise it’s intriguing to see what Reuters’ full-time chart analyst Wang Tao has to say about metals and energy prices. His full report also contains soft commodities, but we’re no pansies, so we won’t cover those here. First up: Gold.

Firstly, of the precious metals, gold is headed for a fall later this quarter in spite of current strength that could carry it to $1,281 per ounce, the article suggests. The last peak was on Aug. 28 with a high of $1,433.31. 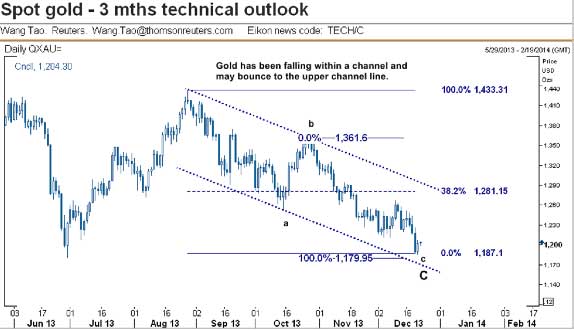 From that level, gold has been falling within a channel and Reuters suggests the lower channel line provides support at $1,180, the 100% Fibonacci projection level of a downward wave C. This support is interestingly spot on the June 28 low of $1,180.71. This support, together with the one at $1,200, has formed a strong support zone, the analysis suggests, which will force gold to bounce later in the year towards the upper channel line of $1,281, the 38.2% level – another key inflection point.

Copper as expressed on the LME is expected to rise into a range of $7,684 to $7,728 per metric ton over the next three months. 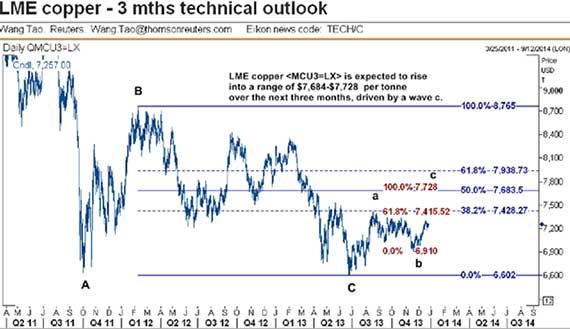 That’s something of a bullish call, but arguably may have offered support for copper’s recent strength, which some analysts have been surprised about.

Aluminum’s story is considerably more gloomy, although those following its price will probably not be surprised to hear it may continue its divergence from a linkage to copper. For the last couple of years, these two metals have shown close correlation at least for price direction, but recently the relationship has broken down – a fall in aluminum with a rise in copper is much more plausible now than 12 months ago.

Up Next: Future price direction for aluminum and oil.