Home | Commodities | What the Chartists See in Their Crystal Ball for Aluminum, Oil Prices
Commentary

What the Chartists See in Their Crystal Ball for Aluminum, Oil Prices 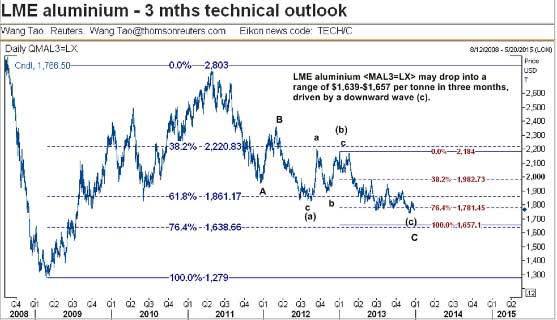 Reuters’ Wang Tao, one of the more prominent chartists out there, suggests aluminum may drop to a range of $1,639-$1,657 per metric ton in three months, driven by a downward wave C. Don’t miss our take on his copper and gold projections, if you’re into those.

Reuters suggests the chances are that it may therefore slide to the 76.4% level at $1,639.

Back in the real world, some analysts have been calling for a sub-$1,700 price for aluminum for some months, but the metal has remained stubbornly above about $1,750. Unless physical market conditions change, we cannot see aluminum at the mid-$1,600s. Unfortunately, Reuters is not putting a timeframe on when this wave C will drop to the mid $1,600s.

What About Oil Prices?

Finally, because its price affects so much in metals-consuming industries, we will include Wang’s analysis for US oil.

Reuters believes US oil is expected to test a resistance at $103.38 per barrel over the next three months, a break above which will open the way towards $112.24. The paper suggests that oil has been consolidating in a big triangle since the end of April 2011. It might be possible for oil to eventually reach the Aug. 28 high of $112.24, which is close to a resistance provided by the upper trend-line of the triangle: 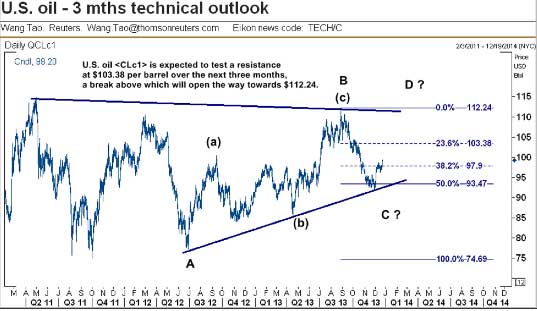 Even though the current rise seems to be triggered by the supporting lower trend-line of the triangle, there is a deeper reason.

Looking at wave patterns starting further back, this support has been strengthened by two other supports lines, respectively provided by a trend-line descending from the 2008 high of $104.27 and the June 2012 low of $77.28. Complicated stuff, but suffice to say Reuters says these three supports have worked together to form a support zone that has contributed to the development of the current uptrend.

Is the analysis a solid guide to future price direction?

We would not suggest that is the case, but certainly enough investors take direction of the Fibonacci analysis as part of their evaluation that projections like this have a bearing on market behavior. Where charts support our wider assessment of price direction, it reinforces our view; where they significantly diverge, it makes us ask why.

But don’t discount them as irrelevant – they influence others even if they don’t influence your assessments.

PREVIOUS POST:
Nirmal Bang, Emkay More Bullish on 2014 Zinc Prices Than We Are
NEXT POST:
Copper MMI®: US Copper Producer Grade 122 Price Falls 1.9% for the Week