You say potato, I say potatoh – such is the atmosphere lately surrounding the price outlook for nickel in 2014 and beyond.

MetalMiner has been covering the Indonesian mineral export ban up, down and sideways, especially how it will (or won’t) affect the nickel markets this year, and we’ve struck a tone that’s not as excited for the upside as some others are.

Front and center of the excited parties: Goldman Sachs. Case in point, Goldman has seen the upticks in the metal price lately and recently increased its 2014 nickel price forecast from $15,000 per ton to $16,000 per ton– a 10 percent increase – mainly citing the Indonesian ban’s potential to crimp supply.

Not only that, but Barclays Plc, Macquarie Group Ltd. and Citigroup Inc. all expect a market deficit, and the latter forecasts the price at $17,000 a ton this quarter, according to the Reuters rundown. (After rallying at the start of January, the current 3-month price of LME nickel is $14,625 per ton as of this writing.)

Whoa, Nelly! – The Ban May Not Last

According to a press release outlining Roskill’s 2014 nickel outlook, some wild card factors will come into play over the next several months, so the Goldman/Barclays/Macquarie bulls better hold their horses. (Couldn’t resist all those cliches!)

1. Politics may derail expectations. Any sustained rises in nickel price from this ban are only as real as the ban itself, which could change quickly as Indonesia’s export policy evolves. A domestic legal challenge has been lodged in Indonesia’s two highest courts, according to Roskill, and early reports of layoffs and protests as a response to the ban will fuel the upcoming elections. (Legislative elections are slated for April 9, while the presidential election will be on July 9.) Indonesia’s current president, Susilo Bambang Yudhoyono, is at his term limit, so who knows what change his successor and new legislature will bring regarding the ban. Besides, Indonesia is looking for a 15 percent increase in foreign direct investment (FDI) in 2014, a tough sell with all this resource nationalism going on…

2. Other countries/supply sources may fill in the gap. Notably, the Philippines is keen to fill in the laterite ore gaps left by Indonesia’s ban, with their export volumes expected to increase. However, the issue with the Philippines’ laterite ore is that its quality is insufficient for China’s rotary kiln furnaces…but China’s producers may be forced to make do with the backup source after current stockpiles run down to fulfill prior contracts, while taking from higher production costs.

3. Don’t discount China’s clout. The Red Dragon “may enter the political fray surrounding the nickel ban and attempt to effectuate an exemption for some of its companies, through diplomatic back-channels. Chinese-Indonesian relationships were normalised in 1990 and China has since grown to become Indonesia’s second-largest trading partner, behind Japan, with bilateral trade expected to reach US$80 billion by 2015…China may leverage its influence to secure the interests of its metal industries by securing additional transitional arrangements,” according to Roskill.

(A quick aside – here’s evidence of China’s encroaching influence where I live): 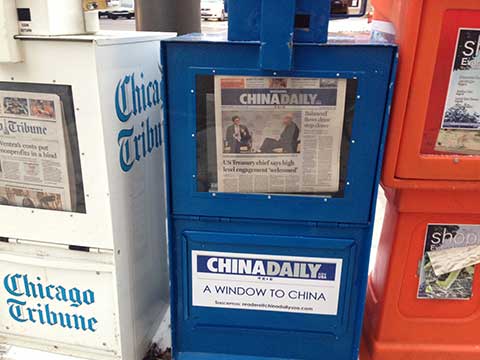 When In Doubt, Check the Technical Analysis

The bottom line rests on two main factors: nickel being in a long-term downward trend, and the ban not feasibly creating supply constraints for at least several months. 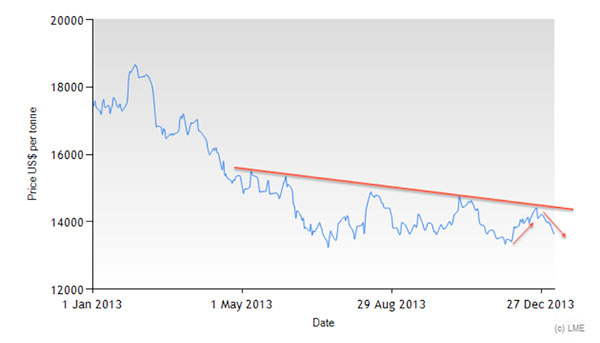 Roskill “remains skeptical that a supply deficit is likely to emerge anywhere prior to 2017/2018,” and that may not be off the mark. As for the timeline, China has about a half-year of stocks, so we don’t expect too much movement until mid-2014.