BNSF Banks on Bakken Shale Oil, But There’s a Catch

Cold weather and consumers snapping up gas-guzzling SUVs, among other factors, are doing their part to keep several forms of fuel in higher demand – along with the petrochemical industry’s production capacity.

Stuart discusses propane and propylene price hikes due to the country’s extreme need to heat lately (Polar Vortex, anyone?). To prove how tight supply is getting, here’s a fact: propane stocks fell by 3.4 million barrels last week to 35.3 million barrels, the lowest for the time of year since 2001, according to the US Energy Information Administration.

However, another ‘hot’ fuel is again in the news lately: shale oil. Why is it making headlines?

According to the Financial Times, three major North American railroads have been hit with huge tie-ups. Canadian National (CN), Canadian Pacific (CP) and especially BNSF are suffering under the weight of massive loads of commodities, including shale oil, being shipped to the West Coast and the Mississippi.

Although grain is the biggest culprit, mainly thanks to the bumper crop that Stuart mentions, shale oil is doing its part as well. “BNSF and CP are among the biggest transporters of crude from North Dakota’s fast-growing Bakken Shale oil producing region,” according to the FT.

Bakken Shale and Rail: Attached at the Hip

For one thing, railway shipping beats out pipelines, such as the Keystone XL, so far. The main reason is because vast rail infrastructure already exists (no need to wait for pipeline construction). Some visual evidence: 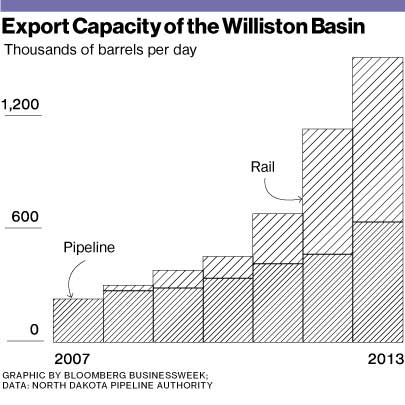 For example, as of last summer, BNSF shipped about 650,000 barrels of crude per day, against almost none five years ago, according to Bloomberg. CP expected to “haul 70,000 carloads of crude in 2013, up from 500 in 2009,” the article states – the bulk of it from Bakken. According to a June report by Bloomberg Industries, “71 percent of all Bakken crude now leaves the region by train, compared with 25 percent in January 2012. Only 20 percent travels by pipeline, down from 61 percent in 2011.”

So important is Bakken shale oil to the rail companies and vice versa that once the Materials Safety Administration released a report recently stating that crude from the Bakken region can be more flammable than from other regions, railroad company stocks immediately tumbled – CN and CP were among those hit.

On a Cost Basis, Though…

Transporting oil by rail still costs more than by pipeline, and that’s a consideration that likely won’t be overlooked.

By some accounts, rail-based crude transportation costs five times more ($10–$15 per barrel). If more safety issues like the one mentioned above keep cropping up, in addition to the railway logjams the big boys are facing right now, and if a successful pipeline extension is finally built, we may see an about face in the statistics in that graph.