The Shanghai bonded warehouse inventory pile is hard to gauge because it is held privately, but the International Copper Study Group (ICSG) has, from January, made a stab at it by using, and I quote, “an average of stock estimates provided by three consultants based on their ongoing research and analysis of the Chinese copper market to estimate the unreported inventory changes.”

More on current copper inventory in Part One here.

When those numbers are factored in, it transforms the copper market picture, as this graph from the Reuters article illustrates: 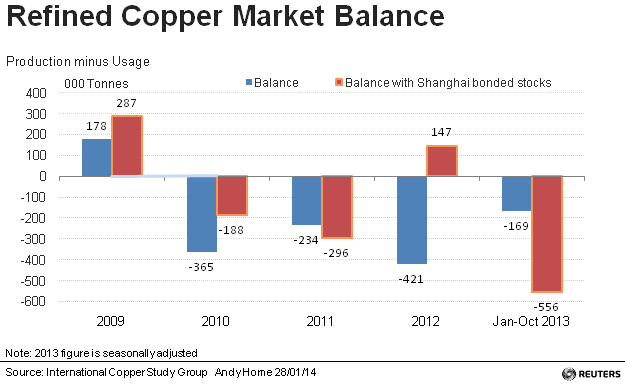 Obviously, this has a few implications on copper prices moving forward.

Which explains why exchange inventory has been falling, both on the LME and COMEX, and why short position holders are now paying the price on the front-month LME spreads.

In short, Reuters estimates the market had been broadly in balance the last couple of years and it is the perceived changes in the supply balance that have been dictating prices – perceptions distorted by the invisible Shanghai bonded warehouse stocks.

So what does that tell us about prices in 2014?

The market is moving into surplus at some time, but the real deficit is larger than had been thought and the $64,000 question is to what extent those bonded warehouses could soak up any surplus.

Tighter liquidity in the Chinese market is likely to make such activities, supported as they are by the shadow banking sector, more expensive or harder to fund; that may suggest prices will experience more downward pressure later this year.

In the short term, the copper supply squeeze remains. Not counting short-term sentiment, driven by a stronger dollar, and reductions in the Fed’s quantitative easing, cash copper prices particularly could remain supported around current levels for a while.