Is World Bank’s 2014 Base Metal Price Forecast a Shocker?

The World Bank thinks we are in for generally lower metal prices in 2014, continuing the trend of the last two years as slowing growth in the world’s largest metal consumer, China, fuels a negative attitude towards commodities in general as an asset class.

In a recent quarterly report, covered by the Financial Times, the World Bank said prices of the main commodities – energy, metals, agriculture and fertilizers – are expected to decline for the second successive year in 2014. 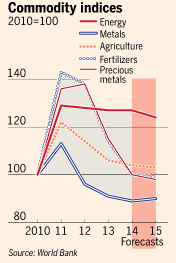 Copper, aluminium, zinc and other metals enjoyed a long bull run until early 2011 thanks to surging demand from China, but since then base metal prices have fallen by more than any other commodity class, in part due to oversupply.

How much further will they fall?

Prices are predicted to drop another 1.7% this year, though much depends on the strength of the Chinese economy. As if to reinforce the World Bank’s predictions, metals prices dropped late last week – copper, nickel and aluminum all fell amid a wider sell-off in base metals, triggered by a strengthening US dollar, weakness in emerging market currencies and, of course, worries over a slowing Chinese market.

Aluminum prices slid to a four-and-a-half-year low, at least as measured by the LME, where cash is currently trading around $1,685 per metric ton; although, with a $450/ton physical delivery premium, spot sales are achieving closer to $2,150/ton.

Indeed, spot aluminum prices have actually risen in recent weeks due to the physical premiums, but the investor class driving LME prices is not necessarily the same as the physical traders, banks and consumers involved in the physical market – hence the divergence. The increase in premiums, which have also reached record levels in Europe and Japan, reflects a growing number of smelter closures, a tight scrap market and, more importantly, strong demand for physical metal in financing deals.

“Cash and carry financing of the excess aluminium inventory . . . has been as profitable as ever over recent weeks, meaning no material is being delivered back to the market,” Macquarie Bank is quoted as saying.

The other factors have all contributed to the tightness, but financing deals are the main driver, sucking up (at a guess) half a million tons a year of physical metal. The recent spike in physical premiums has been exacerbated by merchants, investment banks (Citi has been singled out as a significant loser, having to cover short positions on swaps) and fabricators caught short of metal after betting that premiums would decline following changes to warehousing rules announced by the LME before last Christmas.

They have been struggling to cover those positions because so much metal is sitting off market, tied up in financing deals, and have had to bid up the price to secure metal and cover positions. To that extent, physical premiums may ease in coming months, but with such an opaque market it is almost impossible to see who is exposed, by how much and for how far forward.

Copper and nickel dropped below their respective 200-day moving averages this week, according to Standard Bank, but with dwindling copper stocks on the LME, the metal will probably see some support at least for nearby prices as metal becomes tighter.

RELATED: We explored the copper market in more detail here to understand where these stocks are being consumed and what it may mean for prices this year.