How AK Steel (NYSE:AKS) and ATI’s GOES Strategy Is Backfiring

We said so at the time because the GOES customer base has shifted in the past 20 years. It has become more concentrated, more global and more sophisticated from a supply chain perspective.

That means the strategies and tactics deployed by the two primary domestic GOES producers to shore up domestic prices (and thus improve their own margins) through the pursuit of trade cases simply won’t work as they have previously.

Ben Ehmcke, president of Ehmcke Consulting, consultants to the electrical transformer industry, told MetalMiner: “I know of four or five companies that are in the process of moving transformer core production outside of the US.” The companies would therefore access foreign material instead of domestic GOES material. One has already done so – Power Partners, which represents between 11,000-12,000 metric tons of AK Steel production volume.

The implications are significant.

The Industry Has Become More Concentrated

Obtaining market intelligence within the GOES industry remains a challenge. Nevertheless, based upon MetalMiner analysis and with the help of industry insiders, we estimate the US GOES-consuming transformer market at approximately 250,000 metric tons. Here’s the breakdown by market share: 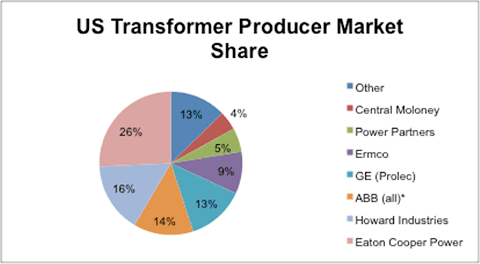 Source: MetalMiner analysis based on industry source input. *Does not include ABB Canada’s power transformer facility. Other notes: Chart includes figures from some power transformer makers but not all; not included or no information as of yet are MEPPI, HHI, WEG, and ABB Power. Some listed in “Other” are large consumers of NGOES; the portions here are only GOES listed. Figures do not include lamination processor or core-making consumption of GOES (Tempel, LSI, Cogent).

The removal of Power Partners’ volume from domestic production appears significant. With four to five additional players (potentially) leaving the market, we can’t help but think AK Steel and ATI will face a big challenge from a capacity utilization perspective. Keep in mind that China has its own anti-dumping case in play against US-made GOES. Said differently, if the US producers lose market share to Canadian, Mexican or other global GOES production sources, they will unlikely make up that share via exports.

Companies that historically produced cores in the US will simply shift production elsewhere – in some cases, to companies like Cogent Power of Canada, and in other cases, to their own operations in neighboring places or other core-makers. The raw materials can come from any global source. This represents a serious risk to the domestic GOES producers.

Moreover, the overall globalization of the customer base means transformer makers have more options for securing supplies. The make vs. buy equation allows transformer producers to use third parties to manufacture cores, or, those same companies can produce the cores in-house and in some cases, from multiple geographies. US-only transformer producers will remain dependent on domestic suppliers, but if domestic suppliers raise prices significantly, even that portion of the customer base could become at-risk.

Next Up: How the domestic GOES producers may challenge those that offshore core production – and what impact this trade case will have on GOES prices.

The Monthly GOES MMI® report will be released tomorrow – brush up on what we said last month.