Precious metals have been the plaything of switching investor sentiment lately. Fears of emerging market economic instability and corresponding slowdown in commodities consumption have hit equities and risk appetite; as a result, gold has benefited a little with prices rising over the last month.

It would seem mining companies also see more upside than down to gold. Last year saw the lowest outstanding level of gold sold forward in 11 years as miners chose to take their chances in 2014 that prices would not fall further.

Physical gold demand in Asia has been relatively strong, at least up to the Chinese New Year, helping to support prices. SPDR Gold Trust, the world’s largest gold-backed exchange-traded fund, said its holdings rose 3.89 tons to 797.05 tons on Tuesday. The fund, which saw over 17 million ounces of gold leave its vaults last year, has not seen any outflows in more than a week according to Reuters.

ETF Securities said on Tuesday its gold ETPs saw inflows of $44 million last week – the biggest since August. “The risk-aversion attitude in the market is quite significant and gold should benefit from that in the short term,” Mark To, head of research at Hong Kong’s Wing Fung Financial Group, is quoted by Reuters as saying. Gold has gained 4% so far this year after a 28% drop in 2013, but Standard Bank is not alone in saying they do not expect the strength to continue through February and beyond.

Silver has been rangebound in H2 2013 between $18.50 and $19, but after a flurry above $20 last month the price has fallen back. With industrial applications accounting for 46% of total silver demand, a slowdown in manufacturing should continue to weigh on silver negatively, Standard Bank believes (coins and medals make up around 10% of total demand, and implied investment demand around 13%). But even the rise in net speculative short positions for silver doesn’t encourage the bank to believe there is significant downside risk presently. 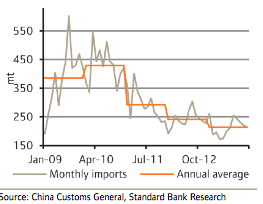 Although China is the world’s largest consumer, the country is said to be well covered by inventory and has not responded to falling prices by increased buying, as has happened with gold. Support for prices to move higher would likely only come from a surprise increase in Chinese manufacturing output, an unlikely prospect based on current slowing trends.

In the PGM Arena

In spite of the ongoing threats of and actual strikes in South Africa, platinum has failed to hang onto gains and gradually drifted lower in H2 2013; the price struggles to remain above $1,400 per ounce. Palladium appears somewhat better supported, between $700 and 750 per ounce, but recent price falls to the bottom of the range do not leave much of an upside. A proposed South African palladium ETF may add an element of demand not currently featured in the market, but there is no start date for that investment although their platinum product added significant demand to the market supply balance when launched.

For now, precious metals appear more likely to be buffeted by fear of emerging market frailties, equity markets and the probability of ongoing reduction in QE than hard supply and demand data. Nevertheless, the upside for the class as a whole appears limited.

Prices for Japanese gold bullion remained constant this past month.