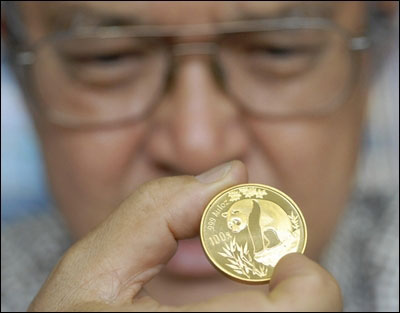 We’ll obviously be delving into the third item – gold. (If you’d like more on pandas or wine…)

In spite of speculators cutting gold length and moving into a net short position on silver, recent import and consumption data from China suggests the Chinese market may continue to support gold prices at current levels in 2014.

Reported in a Thomson Reuters article, China’s import figures underline how the fall in prices has stimulated increased demand among bargain-hunting Chinese buyers.

The country’s 2013 gold imports from Hong Kong more than doubled from the previous year to reach a record 1,158 metric tons, while domestic gold output in 2013 rose 6.2% from the previous year to a record high of 428 metric tons, making the country not only the largest consumer this year, but extending the position as the world’s biggest producer for a seventh straight year.

In addition, Reuters notes, China’s gold consumption figures do not include demand from the central bank, whose gold reserves officially stand at 33.89 million ounces (1,054 tons), but as they have not been revised since April 2009, they could have risen further in the meantime.

So much for imports and production – China’s gold consumption grew to 1,176 tons last year, with jewelry demand climbing 43% to 716.5 tons and bullion demand 57% to 375.7 tons, according to Reuters, quoting the China Gold Association.

Gem-set jewelry and gold product sales increased 13% and 19%, respectively, on a same-store-sales basis. When you factor in the lower gold prices, that equates to a substantial increase in gold consumption.

Of course, Chinese demand could wane.

If consumers felt less optimistic about the future prospects for employment and growth, then consumption could be hit; but wage inflation in China is running well ahead of inflation and generally buyers are experiencing rising incomes in spite of the country’s GDP growth slowing.

Indeed, even a financial shock – such as recent worries about the shadow banking sector – may play into gold’s hands since the metal represents a store of value, as the rise in bullion sales alongside jewelry shows.

We are not saying this is reason to expect gold prices to rise in coming months, but solid physical buying is currently providing support for prices. In the absence of speculative or investor appetite, this support should continue to negate some of the more bearish sentiment out there towards the metal’s future price direction.