Predictions of iron ore surpluses had been the talk of 2013, as the investments made by miners since the end of the last decade begin to come to fruition.

In spite of cutbacks announced by miners, no one expects much of a reduction in expenditure before 2015, as the super tanker that is long-term mine investment is slowly turned.

Indeed, the cutbacks will only bring investment back to the long-term trend, so huge were the sums miners had planned to spend in the heady years after the financial crisis, when stimuli in China boosted demand growth to double digits.

But miners have struggled to turn promise into reality.

Although exports from the majors such as Rio Tinto, BHP Billiton and Fortescue are running at record levels, Vale has struggled to add anything in 2013 and may not do much better in 2014, according to HSBC’s latest Quarterly Global Metals & Mining Report.

But BHP and Rio alone are said to have increased iron ore exports by over 90 million tons last year, according to a recent FT article, but rather than flood the market, demand by China’s steelmakers has kept pace, with imports at a record 86.8m tons in January, an 18 percent rise over the previous month.

Unexpectedly strong as Chinese steel demand has been in 2013, it has been softening of late, from a peak production of 2.2m tons a day in May to about 2.0m tons a day in mid-January. 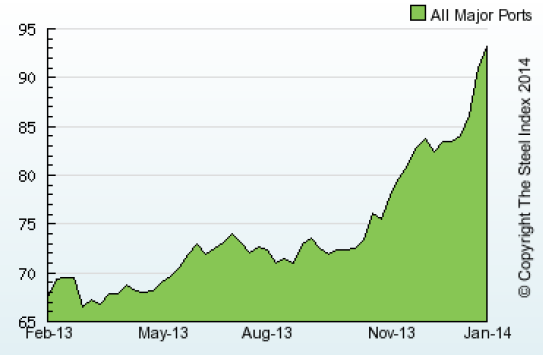 Iron ore inventory at ports has risen as a result, with stocks now standing at a near-record of 97.25m tons – maybe because of that, prices have fallen from $135 per ton at the start of this year to $120 per ton over the last week. 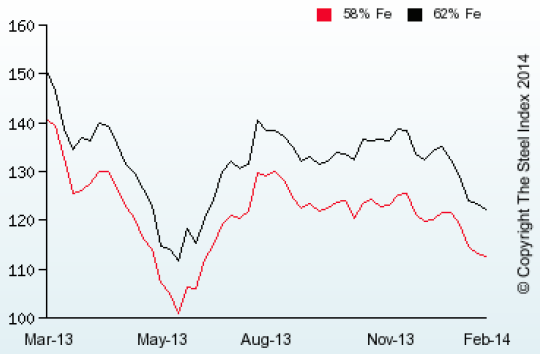 In spite of strong imports and exports from China in January, most analysts are expecting a continued slowdown in 2014 and read January’s performance as restocking ahead of the Chinese New Year.

First quarter figures will be needed to see how the three months have actually averaged out, but HSBC is expecting Chinese growth in iron ore demand will more than halve from 6.9 percent growth in 2013 to 2.9 percent in 2014. Nevertheless, the bank sees global steel demand increasing at 3.1 percent this year with the rest of the world contributing the demand that had been missing in recent years.

As a result, the bank believes a less-than-anticipated rise in supply will meet a robust demand picture and maintain a relatively tight market, at least for Australia’s higher grade 62%+ Fe that can be used without sintering. As we have written recently, environmental considerations in China are driving demand for higher-grade iron ore that can be used without the polluting pre-stage of sintering. 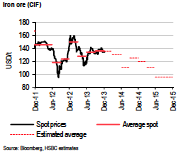 The long-anticipated surplus is on the way; the question remains when it will begin to materially impact prices. HSBC is relatively optimistic that prices will remain well-supported this year, actually rising, as the graph shows, and only succumbing to oversupply in 2015.