Most sources agree that the zinc market is more or less in balance.

The World Bureau of Metal Statistics reports the market was in a small surplus last year, specifically 78,000 tons between January and December 2013, but that is down from a 343,000-ton surplus the previous year.

At the same time, stocks have fallen, the firm reports, by 459,000 tons, mostly as falling LME inventory; LME stocks represent over 63% of the global total as best as can be estimated. 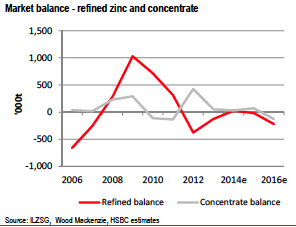 HSBC agrees, saying in their recent Quarterly Global Metals & Mining report that they see the market balanced in the near term, but moving into deficit – first for refined metal, then for concentrate a year later, as the graph above shows.

Arguably, this is a better position for consumers than had been feared a year back.

The imminent closure of major mines, notably Century, Brunswick, Perseverance and Lisheen over the next few years was expected to push the market into an early and significant concentrate deficit, but HSBC reports a rash of smaller new mines are coming on-stream that will, in large part, make up for these losses, if not meet all of the further growth in demand.

Indeed, so bullish is the bank about mine supply that it quotes figures of an additional 594,000 tons of supply this year and 555,000 tons next year from these new projects.

Refined output is back up to levels last seen in 2010/11, but environmental policy decisions in China are also impacting domestic smelters’ ability to achieve greater utilization rates. China is the world’s largest consumer and refiner of zinc, so demand and production in the country is key to the fundamentals for the metal. 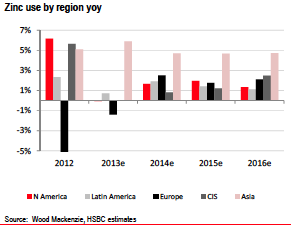 While on the subject of demand: although China dominates the demand landscape, the contribution made by North America, Europe and Japan is cumulatively still very significant, and it is here that the picture is finally turning positive for zinc across all markets rather than just some, as this graph from HSBC above illustrates.

But what role does warehouse hoarding play in the price forecast? Read on in Part Two.

PREVIOUS POST:
Eramet Postpones Indonesian Mine, Backs Ban to Help Nickel Prices
NEXT POST:
Why Zinc Prices Will Rise (Hint: Glencore’s Got Something to Do With It)