At least among the precious metals, palladium appears to be the darling among analysts this year.

Both Standard Bank and HSBC are expecting higher prices in the period between 2014-17 as investors are encouraged by a tightening supply market, as the overall market moves further into deficit, and rising global auto sales.

A Look At Palladium Supply

Firstly, the supply side. Both Johnson Matthey and HSBC are seeing a decline in output from traditional sources. Russian stock sales have been declining for years; from a peak of 1.5 million ounces in 2007, state sales have declined to just 1 million ounces last year.

Most believe Russian inventory is running out and will cease to be a meaningful percentage of global supply going forward. At 1 million ounces, current stockpile supply equates to just 2 percent of gross global supply, down from 17 percent in 2007. 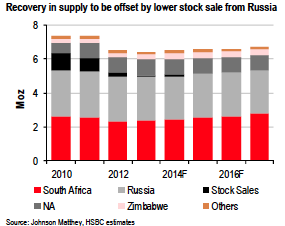 Expansion at South Africa’s Bushveld Complex and Zimbabwe’s Great Dyke will make up for some of this, particularly for palladium, as the resources are comparatively richer in palladium than platinum compared to the mainstream Merensky and the Upper Group 2 Reefs.

Palladium Demand Down on Investments

Demand, meanwhile, has been down last year as investment demand dried up.

Johnson Matthey is quoted by HSBC as estimating net demand was down 5.9% to 7.17 million ounces largely due to a lack of investment demand. Optimistically, both banks expect auto demand to turn this around in 2014 with a rise of 7.3% predicted by HSBC to 7.69 million ounces.

The main driver for this is global light auto production, which the bank sees rising 3.7% in 2014, led by Chinese growth of 8% and tighter emission standards globally. In 2013, ETF purchases of palladium were negligible, but the proposed launch of the ABSA Palladium fund in Q1 of this year is expected to change that picture and promote significant physical uptake. 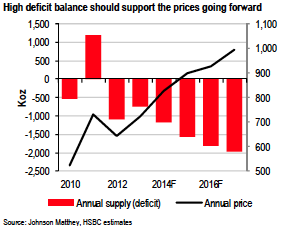 HSBC says that based on their outlook for strong demand growth and marginal recovery in supply, they forecast a widening of the supply deficit during 2013-17, averaging 15% of the total demand and rapidly reducing the availability of above-ground stockpiles.

As a result, they see the price rising to an average of $825 per ounce this year and $900 per ounce in 2015. Standard Bank agrees that the price has more upside potential than down, and suggests over the short term a run-up to $750 per ounce is likely.

PREVIOUS POST:
Why Zinc Prices Will Rise (Hint: Glencore’s Got Something to Do With It)
NEXT POST:
Chinese Copper Wire Price Drops 1.5%