Home | Inventory Stock Levels | Why Zinc Prices Will Rise (Hint: Glencore’s Got Something to Do With It)
Market Analysis

Why Zinc Prices Will Rise (Hint: Glencore’s Got Something to Do With It)

HSBC has recently raised its zinc forecast estimates for 2014 and 2015 consumption on the basis of an improved outlook for growth in Europe and stronger apparent consumption in China, where last year’s stimulus measures are expected to continue to influence demand in the construction sector for some quarters to come.

If you missed the lead-up on why the market looks balanced, check out Part One of this article. 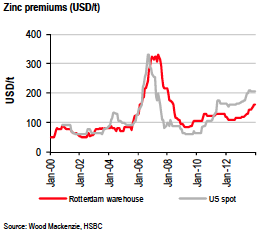 This market balance trend is expected by HSBC to continue this year and next year, with falling inventory and a firming price: 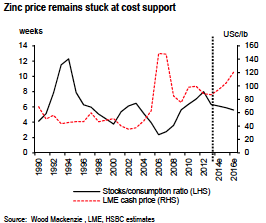 However, we also have to ask to what extent the contango finance trade affected inventory levels last year.

The volumes of zinc involved in this trade are a fraction of those in aluminum, but is certainly a play undertaken by some parties when the forward price curve allowed.

Reuters last year suggested Glencore, a major zinc producer, zinc trader and owner of the warehouse group Pacorini, has been tightening its grip on the global market since the year before, moving zinc to inaccessible warehouse locations and forcing industrial users to pay high premiums to get physical delivery of a metal in surplus.

While the overall direction in stocks has been down, Reuters observed, LME zinc stocks quadrupled last year in the Dutch port of Vlissingen, a stronghold of Glencore’s Pacorini.

But it has to be said that since that Reuters article last year, no further evidence of manipulation has come out, nor does the forward price curve currently support contango financing, so the amount of metal that may be locked up off warrant in this manner is anyone’s guess.

As far as HSBC’s and the World Bureau of Metal Statistics’ assessments of consumption go, hoarding in this manner would appear as zinc consumption, as it effectively disappears from the market. It is possible, therefore, that real demand is somewhat lower than it appears; but as with aluminum, gauging the extent to which this has been a feature in 2013 consumption numbers is all but impossible.

It will be interesting to see how actual demand pans out in 2014, but of all the base metals, zinc probably retains the most bullish narrative. HSBC is predicting an average price of $2,080 per metric ton this year and $2,300 per metric ton next year.

Consumers may be advised to budget accordingly.