The platinum market, to borrow a soccer phrase, is a game of two halves.

The platinum price has fallen steadily over the last 12 months, as the following graph from Johnson Matthey shows, but this coming year the future may not be as gloomy. 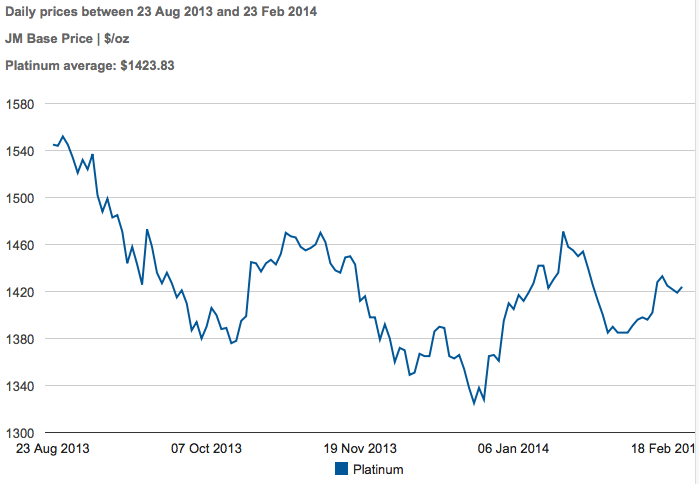 Platinum has struggled from the double-hangover of a falling gold price and excess liquidity created by above-ground stocks. The price has been dragged down like gold because of the metal’s role as a financial investment product, but a tightening supply market heralds a decoupling and rising prices this year and in 2015, according to HSBC in its recent Quarterly Metals & Mining Review.

Following strikes in South Africa in 2012, production increased last year, as the graph from HSBC below illustrates. 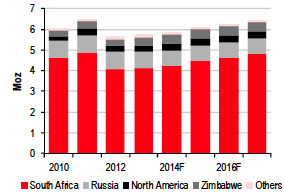 Underlying production, in the bank’s opinion, is unlikely to increase meaningfully due to mine closures, a weak project pipeline, curtailed capital expenditure (largely due to the low price) and continued margin compression. A reduction in the South African rand has helped miners’ margins a little, but in the bank’s opinion, a price of closer to $1,800 per ounce would be required to incentivize decent levels of investment.

As a result, South African producers have actively sought to reduce their exposure to high-cost ounces and the main investment has been in mechanization to drive cost reduction.

So while most see only modest increases in supply, more from recycling than new mine production, demand is expected to pick up significantly this year and next.

The main driver is said to be automotive demand in Western Europe, where the prominence of diesel engines will drive platinum use.

More on demand, and on the exact platinum price forecast, in Part Two.