Copper Market Analysis: Where Is the Surplus?

Towards the end of last month, we posted an article on the copper market in which we reported that the International Copper Study Group (ICSG) was for the first time assessing the size and implications of changes in China’s bonded warehouse stocks – previously all but invisible to the wider market, and consequently distorting analysts’ view of true consumption figures.

The ICSG’s latest figures for November are detailed in a Reuters article this week and take some sifting, as they give both actual and seasonally adjusted estimates, but the summary position is the ICSG believes the latest calculation suggests in the first 11 months of 2013, the global refined copper balance (adjusted for Chinese bonded stock changes) showed a deficit of 674,000 tons compared to a deficit of just 40,000 tons a year earlier.

The problem for those trying to judge true consumption is that these bonded stocks in China are more a function of financial activities than industrial demand.

As Reuters points out, a core driver has been the use of imported copper as collateral for raising loans. So, strong Chinese import figures that had been taken as evidence of strong industrial consumption and a bullish signal are now being looked at with a more jaundiced eye.

Stock build can quickly turn to stock liquidation if circumstances require, and as such, heralds greater volatility rather than rising prices. As Reuters reports, China’s imports of refined copper came in at 379,000 tons last month, the second-highest monthly total after December 2011.

In addition, imports of copper concentrates fell just short of the previous month’s record of 1.040 million tons, while those of anode were a fresh record at 80,000 tons. Certainly New Year’s celebrations, both Western and Chinese, have played a part in distorting the figures; a fairer picture will emerge with February’s numbers, but this graphic illustrates how strong apparent demand has been:

The outcome has been a steady buildup of Chinese copper stocks.

Those registered with the Shanghai Futures Exchange (SHFE) jumped by 13,770 tons last week and at a current 194,111 tons are the highest they’ve been since Q2 2013, according to Reuters. The less visible mountain of metal sitting in Shanghai’s bonded warehouse zone has also reportedly been rebuilding, while analysts at Barclays Capital suggest a 75,000-ton increase to around 600,000 tons over the month of January.

Meanwhile, exchange-traded stocks are being cancelled at a record rate, with LME copper warrants in New Orleans accounting for 99.2% of the total 163,425 tons of copper in US LME warehouses, and with 55,100 tons of that material sitting in the cancelled warrant category, the market is clearly tightening even as analysts would have us believe it is supposedly moving to surplus globally.

In the medium term, the copper market will probably will be in surplus, but in the short term the nearby tightness for prompt delivery is likely to get worse. 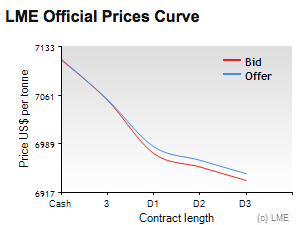 Someone somewhere is making a lot of money out of this.

PREVIOUS POST:
Caterpillar Inc, Nucor Tussle Over Trade As China Quietly Mines…Data?
NEXT POST:
Accenture Says Green Is the New Gold – But Is It?