The platinum price has been rising for the last 12 months, as this graph from producer Johnson Matthey shows, even as gold – with which it is often linked – had been steadily falling for most of last year. 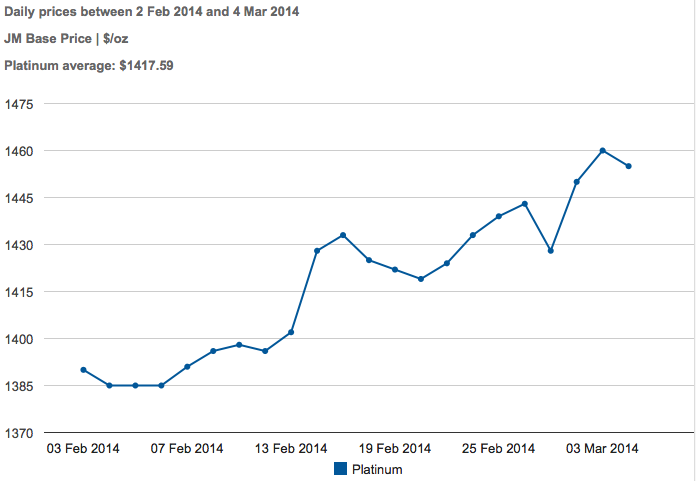 Platinum and its sister metal palladium have certainly benefited from rising automotive production, stimulating demand from the catalyst market, but platinum has also seen support from unrest in South Africa’s mining sector.

South Africa produces 70 percent of the world’s platinum and the current five-week strike called by South Africa’s Association of Mineworkers and Construction Union (AWCU), affecting, as it does, mining companies Anglo American Platinum (Amplats), Impala Platinum (Implats) and Lonmin, has halted some 40% of world supply.

The two sides are in talks, but the AWCU’s call for a mass protest in Pretoria doesn’t bode well for their attitude being any more conciliatory than it has been in the past.

The mining companies have offered a pay deal of 9 percent, well above the current inflation rate of 5.8 percent, a Reuters article reports, but still the two sides are a long way apart, and the AWCU is demanding a doubling of wages. In the meantime, the mining companies claim they have lost 6.6 billion Rand (US$615 million) in revenue, according to Reuters, as about 10,000 ounces of production a day are lost.

Meanwhile, miners have also missed their first paychecks since the strike started and hardship must be building among them and their families, lending support to some form of compromise.

So far, the impact on the platinum price has been relatively muted – we’ve seen no sudden spike as the investment community has become accustomed the antics of the AWCU union since the bloody turf war between the new AWCU and their predecessors the National Union of Mineworkers (NUM) in 2012.

Part of the reason for the limited impact on price could be because physical supply remains steady. Standard Bank estimates from Swiss and UK customs data that producer inventory in London and Zurich vaults might be around three months’ worth of production. Inventory deliveries into Zurich and London have been stepped up since summer of last year, as the producers probably saw this situation coming.

As a result, the bank judges that the current strikes, and the possible price movement, have a finite period before producers need to go to the market to buy metal to honor existing off-take agreements.

Right now, the platinum strike is in its fifth week, and the closer it gets to 12 weeks, the stronger the case that the platinum price may push higher.

It is likely that miners facing rising hardship without a regular income may be forced back to the negotiating table before then – that, no doubt, is the hope of miners and consumers alike.