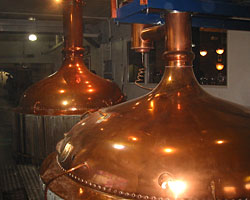 When I began researching a post a couple years ago about beer and brewing equipment, I distinctly remember my first Google search.

I remember that it began and ended with Alibaba.

What I don’t remember is exactly which search term or terms I entered (“brewing equipment”? “copper brew kettles”? “stainless fermenting tanks?”), or whether I went directly to Google Images to find a bold image of a mash tun or lauter tun or bright tank – but there is no doubt in my mind that the top results came from Alibaba.

Why? Because this Chinese Amazon-eBay-PayPal-hybrid behemoth sells anything and everything under the sun, but it’s also a one of the biggest (the biggest?) e-commerce platform in the world, operating “an Amazon-like online shopping mall, a eBay-like venue for individuals to buy from other people, a business-to-business sales platform and a PayPal-like online payment platform.”

Now, Alibaba is making waves about having potentially the largest IPO (which will likely happen in the US, not in Hong Kong) in history – some figures are putting it at $15 billion.

But has it made any headway as a remotely reputable global sourcing platform?

Jason Busch, the executive editor of MetalMiner’s sister site Spend Matters, has dabbled in covering the not-so-clean-cut past of Alibaba and its leaders. Here’s how Jason characterizes the company circa 2007:

For those involved in global sourcing, one of the dirty secrets of the trade is how bad most supplier search sites actually are. While many of these directories had the chance to build out community as well as commerce from the start…almost all chose to become global online Yellow Pages of sorts, which make it impossible to discern quality suppliers from second-rate trading houses. One of these directories is Alibaba, a site that fancies itself the hub of China sourcing. But anyone engaged in China sourcing on a regular basis knows it is about as useful as the spam email one gets for months after going to a sourcing conference in Asia.

In a post describing how Alibaba executives were caught up in a fraud scandal, Jason goes on to say, “I don’t know a single medium- or large-sized Western procurement organization that uses Alibaba on any regular basis.

When I asked Jason to comment on Alibaba’s current presence, not much has changed in his view: “The only Alibaba on the desktop of Western procurement organizations – as a general rule – is the one marketed to Asian suppliers by local sales representatives which are overstating its adoption by larger organizations,” he said. “Smaller Western companies as well as individuals are more likely to try the service, but we rarely encounter any organization with a formal procurement organization using the site on a regular basis.”

“ThomasNet, IHS/GlobalSpec, MacRae’s, GlobalSources, TradeIndia and other supplier directories remain far more common as supplier directories, especially in manufacturing,” Jason continued. “These services are also being joined by specialized supplier intelligence providers including Panjiva, Import Genius and others – not to mention Ariba’s own directory listing service. And then, of course, there’s Google, the biggest and most frequently used – albeit un-curated – global supplier directory of all.”

Most ironically, Jason wrote about the last time Alibaba was mulling an IPO back in October 2007, when they won regulatory approval to list shares on the Hong Kong Stock Exchange. “The IPO could bring Alibaba an estimated $1.5B, the second largest internet IPO in history only after Google’s $1.67 debut,” Jason reported. “According to Bloomberg.com, Alibaba’s IPO will value the company at 54 times its estimated 2008 profit.”

Ha! How times – and dollar amounts – have changed.

But, from what we can see, this one of Jason’s takeaways still has merit: “Let’s hope that with the money that Alibaba raises, they can actually become useful to global sourcing professionals by providing new solutions that provide details on supplier financials, performance and quality — rather than serving up advertisements and listings which make it impossible to know if you’re dealing with a world-class manufacturer or a two-bit trading company.”