Every month the American Institute of Architects releases its Architecture Billings Index, billed as “a leading economic indicator of construction activity.” AIA further qualifies its economic index in that it “reflects the approximate nine to twelve month lead time between architecture billings and construction spending.”

Conceding for a moment the assertion that every building design included as paid for in the ABI gets at least to the point of breaking ground, there are several other reasons to look askance at architecture billings as a one-year-out indicator of construction activity. 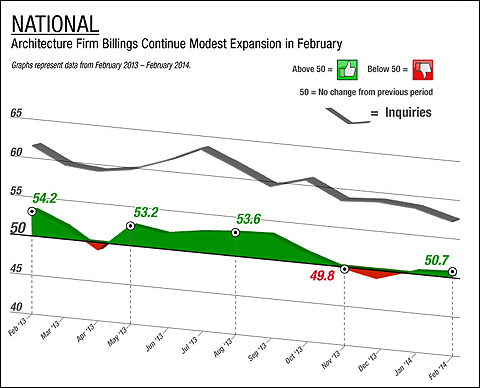 1.) A lot can happen in a year: Let’s assume the designs being submitted to AIA have a fixed cost agreed to between the architect and the client. The ABI is calculated through monthly surveys conducted by the AIA Economics and Market Research Group, and provides a measure for how well the architecture industry is doing.

The information for the ABI is compiled using billing information, so it also provides a guideline for costs. AIA billing is a standardized way for contractors to submit work-related paperwork to architects.

The problem is many contractors look at the guideline for costs as just that, a guideline. The copper or steel specified by the architect could easily get value-engineered out of the project for cheaper materials at the contractor or even the client’s behest, and the guideline for what actually gets built can often bear little resemblance to the design guideline. With design-build and construction management contracts this situation is even more prevalent.

2.) Only AIA members can submit billing information: There are currently 83,000 members of AIA. According to the National Council of Architectural Registration Boards, there are 227,382 registered architects, in-state and out-of-state, in the US. While the number is difficult to pin down, there’s a good chance that half of the architects in the nation are not participating in the ABI.

3.) Design software further muddies billed vs. built: 3D Building Information Modeling is changing the way steel, concrete, rebar and just about every building material is delivered and used on a construction project. By using programs such as Autodesk Revit and Bentley Microstation contractors can eliminate the differences between a designer’s plans and a contractor’s plans that must include places to stand and eliminate errors in design.

General contractors are hiring architects to create their own construction-ready 3D models that eliminate the wiggle-room traditionally left in a set of 2D plans. This means further process efficiencies for the contractors and more savings for the client and, sometimes, fewer building materials used on the job. While BIM is still only being used by 50-60% of the construction industry, its adoption is much higher on high-cost projects such as hospitals, stadiums and federal buildings, meaning that the projects with the most opportunity for savings are all reaping its rewards.

4.) No way to account for stalled large project outliers: The Chicago Spire broke ground in 2007 and has never moved past the hole-in-the-ground stage since. Its developer is hoping to someday resume the project, but with a price tag of near $1 billion to pay off debts and finish the job in 2014 dollars required to finish it, the odds are long. If just one such big project is counted as “billed” in a monthly ABI, how much can it skew the economic picture of billings that month by failing?

The ABI only asks a surveyed member if his or her billings went up, stayed the same or went down for the month in question. So, granted, this effect is somewhat mitigated, but if a firm is working on a large project for several months, completes its design and bills considerable hours – bills them and is not paid for them – it can still skew the distribution when a big-enough project does not get built.

Bottom line: Estimators, EPC contractors and others in procurement functions should stick with construction starts as their best indicator of non-residential construction activity.