by Lisa Reisman and Taras Berezowsky on April 21, 2014

What if you can serve both the steel industry and the automotive original equipment manufacturers (OEMs) at the same time, benefiting them both, without disrupting either industry’s business models or competitiveness?

NanoSteel, a designer of nano-structured steel materials, occupies a very specific niche between both sectors, and the company’s business model, may have just started go get some attention. Ironically, the attention comes not from the production of a specific product but, rather, how they go to market with it.

How the Model Works

Think of Nanosteel as the Dolby Sound Technologies of the industrial manufacturing world. NanoSteel’s model is like Dolby noise reduction – they don’t make the music players themselves, but essentially licenses its technologies to the auto manufacturers, said Craig Parsons, president of NanoSteel, in a recent interview with MetalMiner.

For example, Sony buys radios from other manufacturers and pays a royalty; same with automakers, such as General Motors, buying NanoSteel’s proprietary advanced high strength steel technologies for use in structural steel parts and paying the royalty.

Then, the automotive OEM has the ability to work with multiple steel producers to produce wherever the product is needed. Interestingly, unlike working with aluminum producers, which are more global, and their alloys, which are more interchangeable across producers, the steel industry is more regional/national and each player produces their own proprietary alloys, so it’s more challenging to work with one steel producer for an entire model line. Some may say, a limiting factor with steel.

However, there is a strong case to be made for nano-steel technology as opposed to aluminum.

The notion that aluminum will overtake all body in white (BIW) in automotive is far-fetched. Here’s how NanoSteel sees it: 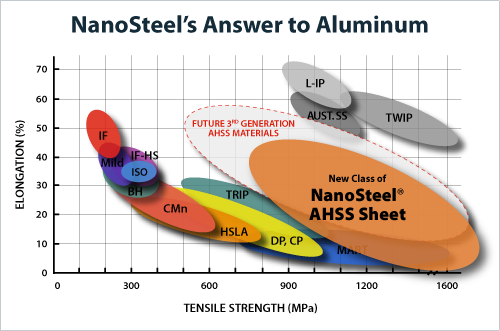 Dovetailing with ever-increasing tensile strength and elongation properties of proprietary grades of NanoSteel’s high-strength steels, the re-tooling aspect is a major issue for automakers increasingly working with aluminum.

According to Parsons, it makes sense that Ford Motor Co. touted their F150 so heavily – it’s because trucks predominantly produced in the US are easier targets for aluminum lightweighting or product substitution due to economies of scale. Specifically, single-plant (or two plants) “A” production platforms (high volume vehicles) like the F150 lend themselves to the product substitution. You can only switch to aluminum where you have little re-tooling of the line, Parsons said; you only get that with “A” vehicles in single geographies, those produced at only one manufacturing facility.

“B” or “C” platform situations – producing smaller-volume vehicles such as the Ford Fiesta, or others on multiple production lines in Mexico – are not nearly ideal for a complete product substitution due to re-tooling costs.

What It Boils Down To

NanoSteel has created a cost-efficient way for steelmakers to drum up higher-value sales, while giving automakers the license to access stronger, lighter and cheaper material – without involving aluminum.