In previous posts, I explained how 3D Building Information Modeling can deliver more efficient, better-coordinated construction projects and, eventually, buildings. But who actually does the work specified in a 3D Revit or Microstation model? Prefabrication of building systems is mostly up to subcontractors working for a general contractor or construction manager.

The unsung heroes of construction, subcontractors are a nationwide legion of small firms and proprietorships who perform very specialized work such as mechanical, electrical and plumbing (MEP) installation, fire protection and other largely hidden building elements.

The difficulty many projects run into is that a trade subcontractor, on the project because of the amount of his bid and not his 3D design expertise, can lack the sophistication to use the 3D model created by the architect and engineers. Without subcontractors in the room during design, much of the promise of a 3D design is lost.

So, how do you get qualified trade subcontractors and keep them on the same page as design, throughout the construction process?

Founded in 1997, the LCI is a nonprofit organization that operates as a catalyst to transform the AEC industries through lean project delivery. Its broad goals include developing collaboration and distribution channels for better construction processes.

Working in a LEAN environment and preparing your building for prefabrication during design means working closely with engineers, construction professionals, and trade subcontractors at the conceptual design stage and throughout the entire building process. Whether your team shares an integrated delivery contract or not, your work processes will need to be more collaborative than the traditional process of handing over contract documents at specific points during design and then leaving the rest up to others.

One general contractor/construction manager that has taken LEAN to new levels is Northern California’s DPR. A major player in California healthcare projects, DPR began experimenting with the idea of using BIM to perform drywall detailing on one of its hospital projects, the Sutter Health Castro Valley Clinic. DPR’s self-performing drywall team made decisions on how best to build in the field and represented those decisions on a spool sheet created directly from the 3D construction model, based on the expertise and decision making of their field foremen who were involved in creating that model. 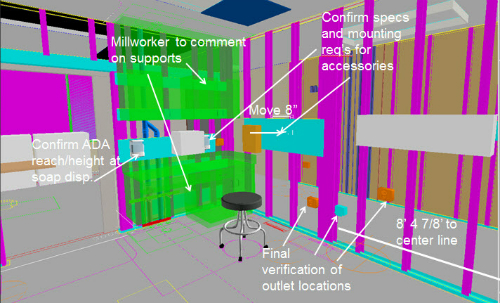 Fully coordinated spool sheets can be created directly from a 3D model with the nuances and exact design of each panel section detailed thanks to rigorous, 1/8-inch-level 3D modeling by DPR and its trade subcontractors in the design stage. With fully coordinated BIM spool sheets, DPR’s drywall team was able to install all of the hospital’s post and panel construction before the walls went in. That meant they could also install the MEP equipment before the walls went in, too, eliminating opportunities for costly rework.

Fabricating ductwork and drywall sections is also an activity better done in-factory than in the chaotic environment of a construction site. DPR had the light-gauge drywall panel frames built in a nearby factory. The finished walls were shipped to the site in sequence, so extra materials were not cluttering the hospital’s site before they were ready to be installed. 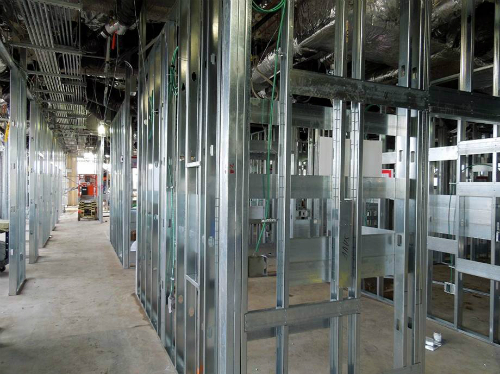 Drywall panels installed according to the model. Image courtesy of DPR Construction.

PREVIOUS POST:
Can Adani Heat Up Under Modi’s New Indian Government?
NEXT POST:
US Aluminum Imports Surge: Is It All About Rusal?