Cheap steel products have been flowing into the United States from China, South Korea, India and elsewhere, making it much tougher for any domestic steel producer price increases to stick – and it looks as though it may be impossible to stem the tide of flooding imports anytime soon.

Record steel import numbers are harming the likes of AK Steel, Nucor and other producers, and foreign producers such as Vallourec and Tenaris getting more capacity online in the US surely isn’t helping. According to reporting by John Miller of the Wall Street Journal, “First-quarter steel imports by U.S. companies rose 36% from a year earlier to 10.6 million metric tons, according to research firm Global Trade Information Services. That was the highest level since the record 13 million tons reached in 2006.”

(BREAKING: This also isn’t helping – Chinese army hackers breaching AK Steel, US Steel, Alcoa Inc, Allegheny Technologies and Westinghouse’s systems to gain competitive advantage for their state-owned enterprises, as per today’s case filed by the US Justice Department. More on SOE’s in Part Two of this article.)

According to another recent report by the Economic Policy Institute and law firm Stewart and Stewart, some 583,600 total jobs, including more than 200,000 in related manufacturing sectors, are at risk of going “poof” if imports dethrone the competitiveness of domestic steel production.

The US steel industry is not the only one being hit – aluminum imports are also at record highs.

US aluminum imports surged in March to 264,100 tons, the highest since August of last year, up 11% from February and 14% higher than March 2013. As Stuart reported last week, “interestingly, inflows from Russia, the home of UC Rusal, the world’s largest primary producer, were particularly dramatic, partially reversing a years-long decline.”

Over 44,000 metric tons arrived in March, more than double March 2013 levels and up 52% from February, according to Stuart’s article.

Which Other Countries to Blame?

Back to steel, China and Korea accounted for more than three-fourths (77.9 percent) of the growth in global steel exports between 2003 and 2012. Imports of Chinese steel by South Korea and Japan rose sharply between 2009 and 2012; Korea and Japan, in turn, are themselves major exporters to the U.S. 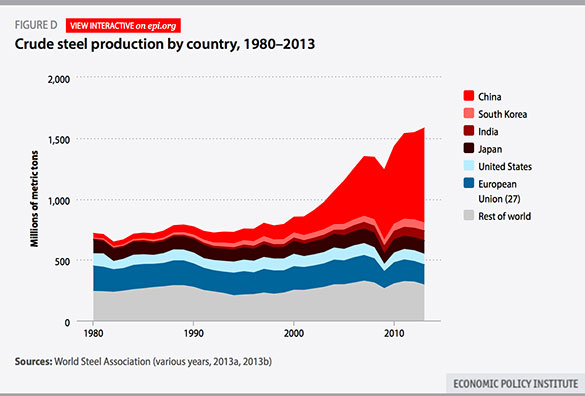 India has its own overcapacity problems, and in an upcoming report for MetalMiner, Sohrab Darabshaw writes, “Lately, a clampdown on illegal iron ore mining had forced Tata Steel and many other Indian steel companies onto their back foot, and looking to foreign shores to pump up their revenues.” Over half of Tata Steel’s earnings come from outside India.

PREVIOUS POST:
Behind the Story: Why Tata Steel Ltd is Still Succeeding
NEXT POST:
Nickel Back Up, Norilsk Says Supplies Will Go Into Deficit Next Year