The Asian seaborne iron ore and coking coal markets are inextricably linked to China’s steel industry and, by extension, demand from the country’s construction sector.

It is no surprise, therefore, when all price indexes head in the same direction. The only surprise would be if they didn’t, so aligned are their cost drivers. We wrote recently about weakness in iron ore prices due to lackluster demand meeting rising supply, particularly from Australia. Coking coal has been following a very similar trend as The Steel Index’s recent Coking Coal Review explains. 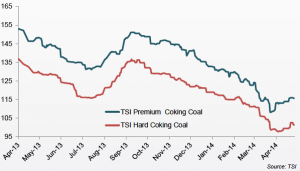 Reversing a long downward trend, prices picked up a little in April as seasonal demand and mild restocking supported prices, but the uptick isn’t expected to last as demand remains flat and domestic producers respond by cutting prices.

As coking coal producers in Indonesia (Borneo Lumberg) announced plans to ramp up production and in Russia (Mechtel) and extended their supply contracts with key Chinese clients, American and Canadian producers reduced output or idled mines in response to falling prices. In addition to weak demand from China, both Japan and Europe reduced imports in Q1 with only India increasing its purchases.

Term contracts in the form of negotiated quarterly premium coal prices also continued their downward trend as this graph from TSI shows. 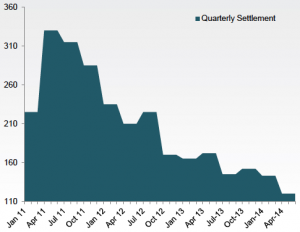 Increased supply from Asian suppliers has not been taken up by a Chinese steel industry that is plagued by overproduction and falling demand. According to Bloomberg, steel reinforcing bar futures in Shanghai dropped to the lowest closing level ever last week. The contract for delivery in October on the Shanghai Futures Exchange fell 0.9% to 3,195 CNY ($513) a metric ton, Bloomberg reported, the cheapest price for a last trade of the day for a most-active contract since rebar trading began in 2009.

Crude steel output in China, averaged a record 2.27 million tons a day in the first three months of the year, according to the country’s National Bureau of Statistics. Rebar has dropped 11% this year as the economy is projected to expand at the slowest pace since 1990.

The reason for the lack of rebar demand from the construction sector isn’t hard to see. China’s broadest measure of new credit fell 19% in the first quarter from a year earlier, while new building construction tumbled 25%, according to sources quoted by Bloomberg. In part, the lack of demand is contributing to the pain in the steel sector.  China’s biggest steelmakers had a combined loss of 2.3 billion CNY in the first quarter, according to the China Iron & Steel Association. The quarter was the “worst” for mills since 2000, a Businessweek article reports.

In the absence of any artificial stimulus, which itself would run counter to everything Beijing is trying to engineer in the economy, there is little to suggest the surplus of iron ore and coking coal supply and lack of finished steel demand is going to change anytime soon. Even the steel mills’ meager attempts to rationalize production will have no meaningful impact. The surprise is more Chinese steel is not flooding global markets, maybe that’s a “treat” that has yet to come.