NEW REPORT: Billions in the Balance – IT Procurement Exposed

I grew up in the suburbs of Detroit, Mich., and for most Americans (and people around the world), that area conjures images of manufacturing ruins, white rappers, and murder statistics. However, as a native of Oakland County, just north of the city of the Detroit, I can be proud of at least one thing – having lived in perhaps the best-run county in the United States.

L. Brooks Patterson, Oakland County’s executive, has a reputation for brutal efficiency and overall excellence in having managed the county for several decades – as well as having a bombastic personality, recently profiled in a New Yorker article – and it follows that anyone working for L. Brooks is equally a superstar. Case in point: Phil Bertolini, deputy county executive and CIO of Oakland County, and someone who White House leaders have identified as a “champion of change.” 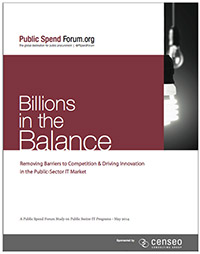 Which brings me to the real point: our friends over at Public Spend Forum and Censeo Consulting conducted interviews with Phil Bertolini and several other key players in and around the public-sector procurement space to complete their first research report: “Billions in the Balance: Removing Barriers to Competition and Driving Innovation in the Public-Sector IT Market.”

If you’re in a procurement function, we highly suggest you read PSF’s kickoff post and then download the free report.

For a little taste, here’s a bit of what you can expect, from PSF Editor Jonathan Messinger:

“As has become commonly known since the struggles of Healthcare.gov became national news, the way the federal government purchases technology and runs large-scale technology program has become deeply flawed. According to research, only 6% of large federal IT programs succeed, while the rest wallow in cost overruns, scope creep and schedule delays.

I believe readers will find in “Billions in the Balance” a unique look at federal IT failures, one that looks at it from not just a procurement perspective, but raises questions about how IT programs are managed, how leadership and better governance can head off problems before they start, and how more innovative technology can find its way into the federal space.”